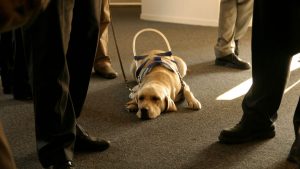 When Brad Thyng, a well-known figure in the community and at the Wynona Thompson Auditorium, received word his service dog Maizie was diagnosed with terminal cancer, the Cody community responded.

People helped raise enough money for him to get a new service dog – Teacup.

Thyng has been the auditorium tech director for many years, so Maizie has been a recognizable part of many school and community events. Leigh Tuten, the activities administration assistant, worked very closely with the two of them, even keeping dog treats in her office.

“Brad and I talk almost every day, so I knew when Maizie got cancer,” Tuten said. “It was so sad, but making things worse was when Brad told me he was having problems with the money for his new service dog Teacup.”

Tuten collaborated with activities director Tony Holt and vice principal Beth Blatt to try and find a way to help support Thyng in his time of need.

Blatt and Tuten both spoke of Thyng’s passion for his job, to the point that Tuten can contact him for any event she’s having trouble with he refuses to get paid for his impromptu help. Tuten said that it felt good to give something back to a man who was so generous.

“If anyone knows anything about Brad, it is his dedication to his work and his community,” Blatt said. “He has done work for the Rotary, the dance clubs, the community theatres and all school productions, K-12. Brad is a big part of our community and the Park County family.”

Blatt set up a $4,500 GoFundMe to cover Teacup and her service dog training. Blatt said she thought having an online fundraiser would not only be the most convenient option to donate money, but also the most far reaching as Thyng has helped people from all over the Big Horn Basin. Plus, since school was cancelled a few months ago, there wasn’t much chance of having a high turnout of physical donations.

“Because his outreach isn’t just to our district, we wanted to reach out further,” Blatt said. “It was surprising how many people Brad has touched in such a way to earn this much support. I think in a time of crisis this community bands together for its brothers. Brad was so honored.”

With over 60 donators, the full $4,500 had been financed around the beginning of May, with most of the donations coming from the GoFundMe. Besides online supporters, however, Blatt and Tuten have also received donations by other methods, bringing the total to well over the goal.

“We met our $4,500 goal, but we also had people dropping money off to me at the school,” Tuten said. “Brad even had checks mailed directly to him, so I think we greatly exceeded our $4,500 goal.”

Brad Thyng in a Facebook post said of how thankful he was towards the community, but also that he had lost his best friend and was still hurting from it. He did say that he had hope for his future with Teacup though, because he wasn’t the one who chose her; it was Maizie.

“I couldn’t do it myself. I had no idea what to do,” Thyng said. “But, she, being the professional that she was, began playing with Teacup as soon as we met her. She let me know that Teacup was the one. Maizie didn’t like other dogs near us. It was a sign.”

Thyng also expressed his desire to at the earliest opportunity, introduce Teacup personally to the whole community. From the large reception of the fundraiser it is easy to assume that just as many people are excited to meet Teacup too.

“I promise, when Teacup’s training is completed and we can all gather again, to share the love and theatre therapy that she has to offer,” Thyng said. “If you are out and about in town, you may get lucky and see her out there working and learning as fast as she can, so that she can finally come home with me.”