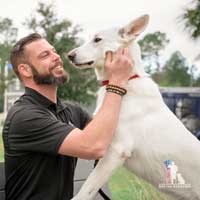 When Master Sergeant Steven Doty, a U.S. Air Force veteran and Webster University graduate who is now the executive director at Webster’s Hill Air Force Base campus in Utah, arrives at work, his co-workers often make comments such as “he’s a good boy” and “he’s so cute!”

But those comments aren’t aimed at Doty, rather, they are reserved for his service dog Filos, which accompanies him to help him cope with his PTSD and Traumatic Brain Injury (TBI).

Doty, who earned a Bachelor of Arts in Media Communications and Rhetoric in 2016 through the School of Communications, was paired with his dog, Filos, a few months ago through the program K9’s for Warriors, a non-profit organization that provides service dogs to disabled American veterans.

According to Doty, K9’s for Warriors pairs veterans with dogs based on medical submissions, personality profiles, interview questions, the temperament of the dogs, and the advice of the dog trainers. “They offer you about four solid days of bonding with your dog,” he said. “The intent is to strictly develop a strong bond with your animal and develop a respect and mutual connection before pursuing any further through the training course.”

Doty said he had many doubts—not so much about the science behind the program, but about whether he was ready to have his condition made public by a vest-wearing dog, along with the attention that would come with it. “Filos would sense this emotional adversity and conduct small gestures of his acknowledgement and calm me down. It was as if he was attempting to communicate trust and affection,” he said.

“It is very hard to explain, and it nearly sounds mythical, but in all honesty, had it not been for his loyal companionship and earnest and instinctual affection, I very-well would have chosen to remove myself from the program and attempt to pursue this recovery in continual solitude,” Doty continued. “He certainly chose me before I chose him.”

Although he wasn’t medically discharged from the service until 2019, Doty said he’d been diagnosed with PTSD long before that, in 2010. “I didn’t truly acknowledge the severity or validity of the diagnosis until much later in mid-2012,” he said. “I believe the catalyst came when I acknowledged a serious chronic pain from a back and leg injury in Afghanistan, and my career and life were slowed as a result or frequent medical procedures, including serious surgery.”

Doty continued, “I believe it was this sudden, nearly abrupt halt of a kinetic and active life which thrust my thoughts to more active, transitioned my subconscious to overly conscious, and cultivated my self-awareness – even doubt – to a keener state. Even then, I had a difficult time accepting that there was a cognitive problem, and while some of it had to do with stigma and social norms regarding mental health, much of it was fear of what it would do to my life, my career and to the relationships that were a significant part of my life at the time.”

Doty said that Webster University has been supportive throughout his entire journey. “As a student, faculty and student-support staff were understanding, personable and approachable,” he said. “If and when circumstances were overwhelming personally, medically or professionally, it was certainly easy to reach out and discuss the factors impacting my life with my superiors and resolve work-arounds, discuss alternative strategies, or simply to voice my troubles to a compassionate ear.”

“As an employee, I was offered reasonable accommodation after surgeries to sustain the workload required, and was fully endorsed when the discussion of a service dog arose as a part of my new lifestyle; there was excitement, elation and genuine interest in the promise they hoped it brought to my recovery. I sometimes question how an organization can be so understanding to a condition so many are fearful of, even hesitant to acknowledge.”

Doty noted that as a team member of the Military Campus Network, having co-workers familiar with the military life and the various stressors, cultural norms and emotions associated with post-military life were instrumental in this caring and compassionate spirit.

“My supervisor, Benjamin Brink [senior director Military Campus Operations], was a former Navy Commander and his ability to relate and connect with my background allowed me to have not only a mutual understanding of my circumstances, but an ‘offline’ mentor at any time, day or night,” he said.

Susan Schultz, Scott Air Force Base Campus Director, is another colleague Doty found extremely helpful. “Susan and I have always had a wonderful, professional connection, but in learning more about each other, we realized we had a great deal more to offer each other,” he stated. “When I was wrestling with stressors, magnified as the result of PTSD/TBI, she detected this and provided a safe, effective avenue for me to express my thoughts and feelings in an empathetic, healthy and productive manner.”Doty went on, “That’s the truest testament to Webster’s accommodations: the notion that they cared more about supporting whatever was necessary for me to get better, than caring about the background experiences or specific factors that arose for my need of such a visual and tangible resource like a service dog.”

Doty said that the best thing other people who are suffering from PTSD can do is acknowledge it. “If there was any headline to my prior management of a very present health condition, it was ‘avoidance,’” he said. “Whether PTSD, or any other medical condition, and no matter the person, keeping yourself locked-in with those adversities only serves to stifle growth. Acknowledgment of our adversities helps us to achieve even more than we first believed.”

Doty said it’s also important to seek help by any means necessary. “Open yourself up to someone, anyone you trust. That might very well be the conversation that transports you into the desired path to a better, more optimal life,” he said. “The road to healing and recovery is arduous, daunting and unfamiliar. The ‘new normal’ feels absent, even awkward. Yet, as time pushes forward, you’ll see more clearly what that toxicity was doing to your life and how you’re prouder and more relatable to the person you were without the negative impacts imparting your daily life. You’ll get better, but you’ll never be the same.”

“I hope that one day, there is no need for Filos to serve as my service dog, my ‘supplemental resource,’ Doty said. “That I can one day ‘de-vest’ and ‘break’ him for the last time, and introduce him simply as, ‘my dog, my best friend…my Filos.’”