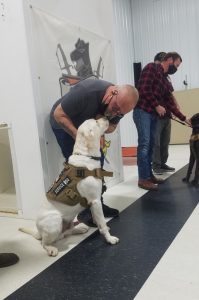 Add a couple more veterans who can ease their stress a bit thanks to the Canines Assisting Service Heroes program.

David White’s bond with Chief was evident during a ceremony inside the Reidel K9 facility this month, while Edward Heddinger and Gunny were unabashedly sharing affection for all to see.

The CASH program, created by the Delaware-based Vietnam Veterans of America Chapter 850 and including partner Reidel K9, provides service dogs to veterans who are amputees, diagnosed with post-traumatic stress disorder and/or traumatic brain injury.

It was all for the greater good, Mr. Miller acknowledged in remarks before a gathering of about 30 persons, including Chapter 850 representatives Joe Startt and Raymond Harris.

“I do want to thank all of our veterans,” he said. “I didn’t serve so this is part of me giving back to you guys and I thank you for fighting for our freedom.

“It’s our turn to give back and that’s for all veterans, I really appreciate what you did for us and our country.”

Mr. Heddinger, a Cheswold resident, said Gunny was like a magnet to him when checking out canines who might make a suitable partner.

“I was looking at three dogs and he found me, he came to me, he sat next to me and that right there created the bond as far as I was concerned,” said the 11-year USAF veteran who was deployed to Iraq and Guantanamo Bay Cuba during his military career, and worked as a Delaware Department of Correction officer for 17 years.

The death of correction officer Lt. Steven Floyd during an inmate uprising at James T. Vaughn T. Vaughn Correctional Institution in 2017 “kind of pushed me over the edge,” Mr. Heddinger said, “and Gunny is just a calming, loving dog.”

For Magnolia resident Mr. White, who served 10 years in the 101st Airborne Division (also known as the “Screaming Eagles”), Chief’s arrival into his life will have a significant impact.

’He’s going to be a great partner and will be able to distract and redirect me from anxiety (that I experience),” he said.

Mr. White had been looking for a service dog, but only found opportunities that came with two- to three-year waiting lists. His wife Emily found Reidel K9, which led to contacting the Chapter 850 organization.

According to Mrs. White, “Initially I think we were in a bit of disbelief, we were afraid it still wasn’t going to happen, but when we realized it was actually going to happen we became really emotional.”

Mr. Miller described Chief as “Our goofy dog … but he is a sweet dog.

“Chief always looks for direction. He can get a bit playful but I like his personality, he has a very cheerful personality.”

Gunny, Mr. Miller said, “is a lover. He can sit there and lay with you all day and not have to get up and move.

“If you don’t mind your face being licked then Gunny is the one for you.”

CASH is set to present two more dogs (Major and Maggie) in 2021. The program is seeking two to three more candidates for train and transfer to veterans in 2022.

The program is in need of foster families for the puppies in the program in conjunction with Reidel K9, Mr. Miller said.