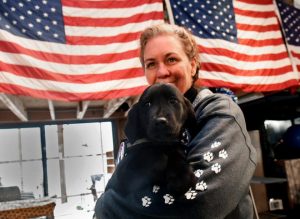 It’s been four joyful and sometimes chaotic years for Laura Barker, training service dogs that will go on to assist veterans and first responders recovering from physical and emotional damage sustained while on the job or serving in the armed forces.

Barker founded the entirely volunteer-run nonprofit Hero Pups in 2016, and this week, she said her organization will prepare to place its 100th service dog with a retired veteran. She said she has already partnered 40 dogs this year with individuals and has another 23 in training.

“You can’t buy the feeling when the individual meets their dog for the first time,” Barker said. “We say even show dogs need someone to look up to, so they created service dogs.”

The story of how Barker came to start an organization dedicated to pairing service dogs with veterans and first responders suffering from emotional trauma connected to their service is rooted in her own personal trauma. Her son was shot three times in the chest serving in Afghanistan with the Marines in 2010.

As her son was recovering stateside in a military hospital in 2011, Barker said she saw firsthand how much service animals could help soldiers on their way to recovery when she saw how a seriously injured soldier responded to a therapy dog that was brought in to visit with soldiers.

“When I saw how much this service dog helped alleviate some of his symptoms, not just the physical but the hidden wounds as well, I said, ‘how could I not do this?’” Barker said. “I didn’t have a nonprofit back then, I was just a Marine Mom who wanted to help and that started this difficult but wonderful journey I’ve been on since. I tell people I’ve been housebreaking dogs for seven years but I don’t keep a single one.”

Barker said not all dogs make good service animals. She said she looks for mixed breeds because they are typically healthier, and they must have the right temperament. She and her volunteer trainers’ experience profiling potential candidate service animals and the behavioral evaluations they undergo helps refine the process.

“The dogs’ individual personality has to be such that they want to work, and that’ll be what makes them a long-term success,” Barker said. “They can’t just be cute and loveable. There needs to be an eagerness to please, but have a certain amount of drive and smarts.”

In order to qualify for a service dog through Hero Pups, the veteran must have been discharged from the military with honorable standing and seeking out some form assistance, like mental health counseling. First responders seeking a service dog have been diagnosed with post-traumatic stress disorder and are receiving support treatment.

“It’s so worthwhile to help a dog that might have otherwise been homeless or face an uncertain future,” Barker said. “Then, to train that dog to help our heroes who serve us every day.”

Since launching, Barker credits her team of volunteer trainers for helping the dogs, and eventually the individual-service dog team, train and grow together. She said there is also a team of volunteer puppy raisers who tackle the hard work of house-breaking and manners.

Barker also said prior to the start of the pandemic, Hero Pups was running a program with the state Department of Corrections to bring puppies into jails where inmates would care for and train them.

“The inmates work with the dogs on specialized task training and they care for them,” Barker said. “It helps them on their road to recovery and gives them a purpose while they finish out their sentence.”

The only times things can become chaotic for Barker, she said, is when veterans’ and first responders’ current service dogs transition out of its working livelihood and the individual is seeking a new service partner.

“It’s the nature of working with puppies, though they can be easier to wrangle than people at times,” Barker said. “We need to make sure the individual is comfortable with the training so they have confidence in themselves and the dog has confidence in them. There’s always chaos, but it’s wonderful chaos.”

One might think working so closely with adorable and loving dogs could make for scenarios where certain ones are just impossible to part with, but Barker said that is not the case at all. In fact, she said it’s the most rewarding part of her work.

“That dog is going to change someone’s life for the better, and that is wonderful and amazing,” Barker said. “They learn to work together as a team by going through training together, I hear stories of how their life has changed by going to places with their service dog where they would have been triggered by before. They become best buddies.”