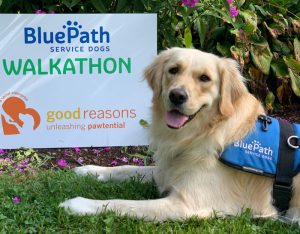 Even from a distance, participants at BluePath Service Dogs’ annual Walkathon showed their support by walking with their furry friends during its virtual fundraiser.

Participants during the fourth annual fundraiser were asked to walk with their dogs on their own and post pictures to the organization’s social media pages afterwards.

The organization, which started in 2016, provides service dogs to children with autism. Sixteen children across the Hudson Valley area have received service dogs since its inception, which are trained to provide safety, companionship and independence for individuals on the autism spectrum.

Participants convened on Zoom for a brief kickoff hosted by CEO Jody Sandler, Vice President of Training Programs Caroline McCabe-Sandler and Vice President of Marketing and Development Michelle Brier. They read to the crowd of over 50 virtual participants success stories from families who watched their children’s lives improve with the aid of a service dog.

Brier read a story from autism mom Nancy Flaherty, who shared how her daughter Caitlin’s service dog Chester saved her from bolting, a common occurrence for individuals on the spectrum who tend to wander off or run away.

“Chester gives our family the courage to stand up to autism,” said Flaherty. “There is no price to attach to a parent’s peace of mind that comes with an autism service dog.”

Purchase resident Kim Rosenbaum has also seen the significant impact a service dog has had on her 15-year-old daughter Lindsay. In a phone conversation, Rosenbaum describes how her dog Autumn has helped the whole family.

“Autumn’s actually been great, because she’s not only helped Lindsay, but we have three other kids, and another dog and if someone’s upset, she can sense that and help,” she said, “so she’s actually done amazing for everyone in the family.”

Autumn has gone on vacations with the Rosenbaum family, to Broadway shows and to yoga classes, which has given Lindsay more confidence to be out on her own, according to her mom.

In a time of social isolation, Autumn has played a greater role in helping Lindsay cope with uncertainty.

“My other kids can talk to their friends online, or call each other, and Lindsay is pretty much nonverbal.” she said. “It’s been challenging having her being isolated at home, and Autumn takes care of her and gives her something to do.”

The Walkathon comes at a time when nonprofit organizations, like for-profit companies, are suffering financially due to the pandemic. Brier believes the key to survival for smaller nonprofits is to keep their donor bases intact, which BluePath Service Dogs has been striving to do.

“We use a lot of data to drive our decision making and so we’ve tried to be really smart on how how we’re fundraising and how we’re supporting the community that supports us,” she said.

She has this advice for keeping nonprofits afloat:

“For anyone who supports a nonprofit, if you can give, please do keep giving to the organizations you care about because they need you.”