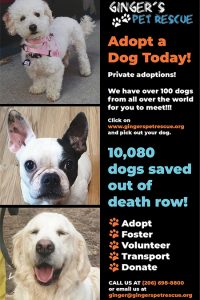 Over the past 15 years, Ginger’s Pet Rescue has saved over 18,000 dogs from all over the world. Iran, Korea, Mexico, Thailand, and the United States are just a few places they have been to save a dog in need.

Founder of Ginger’s Pet Rescue, Ginger Luke, rescued her first dog in January of 2006. “I started the pet rescue by delivering a hamburger to a guy in the trailer park and found abusing his doxie, I offered him a free meal plus $50 for the dog and he handed him over to me,” said Ginger in an email.

After taking the dog to the vet she began looking for a good home for the animal. “After posting him, 10 people wanted him so I adopted him out to a woman who was deaf and Buddy became her service dog.” Once Ginger found Buddy a home she helped the other nine people who wanted a dog but didn’t want to go to the shelter. As a result, she worked on rescuing dogs and matching them up with loving homes.

The Seattle based rescue is a 501(c)3 non-profit organization that is one of the largest non-profit pet rescue organizations in Washington state who specialize in saving Death Row Dogs.

Many of the dogs they save are living in packed cages at slaughter farms in Korea. According to Humane Society International (HSI), dogs are intensively farmed for human consumption. They are given little food, usually no water, and live outdoors in small cages with no protection from the hot summers or brutally cold winters. Many suffer from disease and malnutrition and all are subjected to daily, extreme neglect. Electrocution is one of the most common methods to kill the dogs, according to the article.

That’s one reason why Davies believes Ginger’s Pet Rescue is so crucial, “This rescue is extremely important, it cannot afford to fail because it does too much good.”

If they aren’t able to physically bring the dogs back, they will partner up with rescue groups overseas to provide things like vaccinations, food, wheelchairs, and microchips for tracking.

The rescue is mostly operated by a group of 10-15 retired women who have a passion for animals. “It’s a true passion for people like Ginger and me,” said Sian Davies, CEO of Ginger’s Pet Rescue.

Surprisingly enough, the organization doesn’t actually have a physical shelter location. They rely heavily on fosters in and around the Seattle area to host the dogs during their transition from rescue to adoption. Before the dog’s arrival, the rescue will sponsor to have the dogs spayed and neutered.

According to Davies, many people don’t truly understand how expensive the process is to save these animals. “International dogs have many more medical problems when rescued,” said Davies. The rescue relies on adoption fees and donations to provide help and care for each dog’s needs. At any given time, the rescue can have over 100 dogs in their care. According to their website, over 90% of every dollar generated goes to the rescue of the animals.

Davies believes the average dog in their care needs between $2,000-$5,000 of medical expenses and travel.