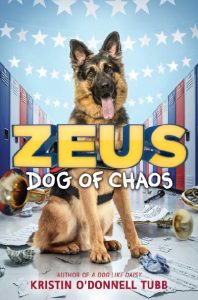 “A middle-school cafeteria contains every human smell there is,” explains Zeus the German shepherd, a diabetic alert dog for an 11-year-old boy named Madden. “Food, all kinds. Cleaning products. Bodies. Soap and deodorant. Burps and farts. Feet. And most important: Madden’s blood.”

“Zeus, Dog of Chaos” is Tennessee writer Kristin O’Donnell Tubb’s second book for young readers with a dog as narrator, and her Zeus is a funny, well-meaning, yet often bewildered guide to the complicated world of human speech and emotions.

Possessing a keen sensitivity to sounds and smells, Zeus experiences life from a uniquely canine perspective and shares his discoveries along the way. How else could you learn the complete vocabulary of a fly? (“Fooooooood” and “poooooop.”) Or that relief smells like “hot laundry fresh from the dryer,” while embarrassment smells like “burnt toast, charred and dry”?

Zeus is in many ways a normal dog: He loves eating garbage, chasing ducks and having his chin scratched. But he also comes from a long line of service dogs, a legacy that he takes very seriously.

His first assignment is not what he expected when he was chosen as valedictorian of his class at Canine College. His classmates look forward to sniffing out bombs and drugs, finding and rescuing disaster victims and other equally serious life-and-death missions, while at first his new job sounds more like babysitting.

Ever the team player, though, Zeus takes his disappointment in stride, remaining high-spirited and eager to please. At his graduation, he fixes his eyes on his trainer: “Dave smiles, the human version of wagging. I want to wag back, but I’m in sit. And Dave knows that I love him, right? I get a little panicky, because what if he doesn’t know? I haven’t told him so since just a minute ago. But I do. I love Dave. I tell him as loudly as I can with my eyes: I love you, Dave!”

Once he begins his assignment, the going gets a little tougher. On the plus side, he immediately grasps his responsibilities: “I inhale and realize what I should monitor for Madden: his honey-scented blood. His blood has chemicals in it, medicine. It smells almost like plastic. I know right away that I’m supposed to let him know if that changes. If it drops too salty, if it flutters too squeaky sweet.”

But in addition to navigating the rowdy and sometimes treacherous halls of middle school, Zeus must also struggle to understand the strained relationship between Madden and his mother (who just returned from military deployment to take over his care from his beloved grandparents) and Madden’s insistence that he doesn’t need an embarrassing service dog by his side at school.

Zeus enjoys accompanying Madden to his classes: the Study of Stuff (science), Dead People Who Did Things (social studies) and the Glorious Study of Labels (language arts). And then there’s Band. It’s the tuba-playing Madden’s favorite class and the one that worries his mother and his doctor the most. It takes a lot of energy to play the tuba — Zeus thinks it makes Madden’s blood go “wild as wolves” — so the devoted service dog immediately declares war on music, with predictably disastrous results.

Watching Zeus careen from one crazy sabotage scheme to the next may put the reader more in mind of Scooby-Doo than Lassie. But Zeus always endeavors to live up to his father’s admonition: “The best service dogs in the world are never seen. Just like your tail. You turn, your tail is gone. Be like your tail.”

No matter how hard he tries, though, Zeus is not like his tail. Zeus is a mess — a sweet, dedicated, lovable mess. And Tubb has written another charmer, sure to be popular with young dog lovers for its sheer joyful exuberance, while it also demonstrates the vital role service dogs play in the lives of those who benefit from their selfless loyalty.