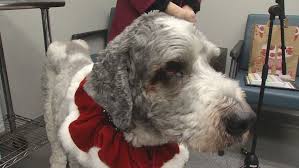 For those of us with dogs, we know they quickly become major parts of the family.

You live for and care for just like one of your own children, and one dog right here in Oklahoma City is beating the odds, and helping others recover as a therapy dog, despite all of the issues he’s facing of his own.

There’s one guest that Deepan Kishore, Director of Research and Surgery at Neel Veterinary Hospital says always brightens his day.

“We love Boris, all the nurses love Boris here we literally wait for Boris to get here he’s super friendly, he wants to play he wants to be happy.” Kishore said.

This is one good boy you’ve got to see to believe, but owner Molly Betensley can tell you a little more about Boris.

Boris is also a certified therapy dog, who takes a lot of pride in his work.

“Boris latest award he’s with therapy dogs international and he got an award for 150 or more therapy dog visits.” Betensley said.

Including a major role he played in the life of someone very close to Molly.

“My mom she was very ill and she had had a procedure in Detroit, boris and I drove 11 hundred miles, he was in the backseat and we got to the hospital and shew as in the ICU and she had coded and they couldn’t wake her up and Boris went right into her hospital room and licked her face and she came too, and she was aware it was Boris and that I was there.” Betensley said.

But Dr. Kishore showed us Boris is fighting some battles of his own.

”In 2018 he had his spleen removed luckily that ended up being benign, he was diagnosed with heart disease back in 2019.” Said Kishore. “He had 6 different heart issues based on the cardiac report, he had valve failure on both sides he had issues with arrythmia, his heart was enlarged and then we call it decompensation when you have building fluid in the lungs.”

Early this year, Boris was given a few months to live, needing checkups every two weeks, but at the end of the year, he’s still going strong.

And Betensley says the secret to his perseverance and prosperity, is the amount of help he’s provided others.

“ I really think because of all the hearts and souls that he’s mended that’s why he’s here with us today.” Said Betensley. “He’s made such a difference in so many people’s lives and not everybody got to go home but I know they are shining down on him.”

Boris is on a very strict medication regimen, and even still is awake every day at 5 AM to get his first walk of the day in. Through the pandemic Boris is still doing virtual visits with folks in the hospital to help spread as much holiday cheer as he possibly can.