Woman Reunites With Her Dog 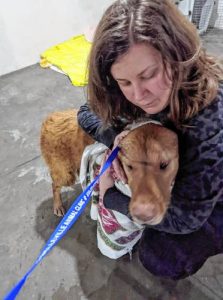 A year, half a country’s worth of distance, and only a single sighting long ago – chances weren’t good that Kate Olson would ever see her beloved dog Walter again. But sometimes, hope defies the odds.

Olson, who lived in Peterborough at the time Walter went missing, was visiting Missouri for Thanksgiving last year, with her boyfriend Curtis Chastain and their two dogs, Fox, a golden retriever and Walter, a golden retriever mix. The visit was going well, until a relative took Walter for a walk while Olson and Chastain were out visiting other family, and the dog, who gets nervous around other people, panicked and slipped his collar, running away.

“We raced back, and started searching and scouring the woods and the area. We just didn’t seem to be able to come up with anything,” Olson said.

It was the start of a year-long nightmare, Olson said.

Their three-day trip was extended an extra two weeks while the couple tried to locate their dog, Olson said, but eventually, they had to return to New Hampshire – though it was heartbreaking to leave with only one dog.

“It was the worst feeling in the world,” Olson said. “I had to get back to work and my life. But I never stopped searching.”

Olson joined multiple lost and found pet pages for the area, and worked with local dog recovery group Lost Paws Trapping along with volunteers from the area to keep searching. There was a confirmed sighting of Walter back in December, and a few reports of a dog matching his description, though there weren’t any photographs of him or signs when volunteers went looking, Olson said. She made two return trips to Missouri, one in January and another in March, to search herself.

Because Walter is a special dog.

Olson got Walter four years ago, picking the runt out of a litter of 10 puppies.

“He was just this five-pound thing, he was just so cute, I couldn’t handle it,” Olson said.

Walter is her “scaredy dog” – literally afraid of everything, Olson said. But she’s an anxious person, too, she said, and she and Walter became a support system for each other.

When there were storms, the place Walter felt safest was with her, Olson said.

She knew that leaving Walter alone to fend for himself just wasn’t an option, and neither was giving up the search.

“I never gave up that hope,” Olson said. “I couldn’t give up. It does eat you up, and you want to give up so you can rest, but I never would have been able to rest peacefully.”

This time, hope paid off.

On Nov. 10, the local volunteers who had been assisting Olson contacted her with a post with a photo of a stray dog that looked a lot like Walter – and while it raised Olson’s hopes, she said she couldn’t be 100 percent sure it was him, based on the quality of the photo. But Lost Paws volunteers investigated the area, and found security camera footage of the same dog, which had been hanging around in the area. One more sighting, and a better photograph, and Olson said she was convinced – her dog had been found, and she was booking a flight to Missouri.

“I was just elated he was still alive. I thought, ‘If he’s made it this far, he can make it one more day,’” Olson said.

She flew overnight, and arrived in St. Louis, Missouri at 9 a.m. on Friday. She was there when Walter finally walked into a trap set up by Lost Paws, and officially went from a lost dog, to a recovered one.

Walter spent several days recovering in secured areas of volunteers’ homes until Olson was ready to begin the road trip back home. On Monday night, Olson said she was finally able to sleep in the same bed with her dog again.

Walter has been checked by a veterinarian, and Olson said despite being dirty and having a case of fleas, he’s weathered his extended time as a stray well – he’s only lost a small amount of weight, and doesn’t have any injuries. Olson said Walter will get a more thorough checkup and a panel of blood tests once they return to New Hampshire. The two are currently traveling to Cleveland, Ohio, where they will meet Chastain for a reunion, and then continue home to New Hampshire.

“I’ll have to change the way I think,” Olson said. “When I think of Walter, I don’t have to be sad anymore. Now, I can just cry happy tears.”