Woman Forced To Leave Due To Service Dog 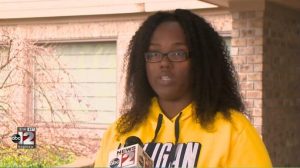 One that not only would be a good companion, but one that could save her life.

“You can’t look at me and tell my disability, but if you were to look at my MRI, you would see that I am missing two parts of the brain. I had two brain surgeries. That I have epilepsy and he is here to respond for when I have a seizure,” said service dog owner DeShawndra Winters.

The 2-year-old black labrador goes everywhere with Winters — often by bus, lift service. But with those services shut down due to COVID-19, Winters said she thought she had found another way to get around.

“I just really wanted a bike and a trailer to put my service dog in, and that’s when this incident happened,” she said.

The incident Winters is referring to took place at the Chicky and Chippie, a vacuum and bicycle shop in Saginaw Township.

“As soon as I come in, at this point I don’t know this is the owner. He tells me I have to get out with the dog and I says it’s my service dog. He says I don’t care, get out, take the dog out,” she said.

Winters said she went outside and called police. She said when the officer arrived, he sided with the owner.

“I keep telling him my rights. He ignores it, and then I was trying to get the police officer to give me his badge number and make a police report. The police officer gets in the car and pulls off,” Winters said.

“We often times assist our clients with discrimination issues with store owners and we really just want to educate them more than anything. Most of the time that education is received very well. But I’m very surprised when the officer did not understand federal law and did not enforce that law,” said PAWS, Becky Canale.

ABC12 paid a visit to the owner of Chicky and Chippie.

The owner said he believed Winter’s service dog was not allowed in the store due to COVID-19. He also said he was unaware of American with Disabilties Act law of 1990.

He also said he called to apologize to Winters and PAWS for his mistake.

Saginaw Township Police Lt. Scott Malice told us a police report was filed and turned over to the Saginaw County Prosecutor’s Office. Malice also said they are also looking in Winter’s claims about her interaction with the officer.

In the meantime, Winters is still hoping to find a bike and lift for her and Nike.