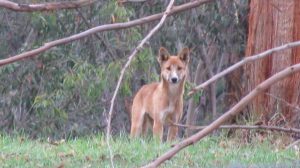 BLUE Mountains residents are being warned not to feed wild dogs, following a series of close calls in the region after bushfires have driven the dogs back into urban areas.

Greater Sydney Local Land Services biosecurity team leader Lee Parker said there had been a series of complaints from residents along Coronation Road near Lincolns Rock in Wentworth Falls and also in parts of Glenbrook about packs of wild dogs roaming the streets, entering backyards and attacking domestic pets.

The local land service even heard claims several years ago that a wild dog took a blanket from a small child around the Lincolns Rock area in Wentworth Falls.

“I was told a mother had put her child down for a brief second, when she turned around, she saw a wild dog taking the child’s blanket away,” he said. “This is serious, we don’t want to see anyone get seriously hurt.”

Officers have discovered a local resident has been feeding the animals, possibly thinking they are domestic dogs in poor condition.

Mr Parker stressed if a dog was not your own to leave it alone. He said they have previously trapped four of a pack of five wild dogs around the Tablelands Road area and are now trying to trap the remaining dog which has recruited a further four dogs from the park.

“By feeding these animals, you are encouraging them to return. These are wild animals, not the pet next door, they are dangers, carry diseases and can cause extremely serious problems if allowed to establish.”

Wentworth Falls resident Richard Kazmierczak said his small breed pet dog had been bitten by one of the wild dogs through their backyard fence.

“They are brazen, we’ve seen them in the driveways when you put out the garbage; my neighbour lost five of her chickens just the other day,” he said.

Neighbour Margaret Harrison said she feared for her safety and had been told by council to carry a stick when loading her washing on the line.

“My husband is nearly 90, I’m nearly 80…we can’t run away from them if they decide to attack,” she said. “There are two small babies in this street. What are we meant to do when they get hungry or aggressive?” Her husband has been calling the situation “Lindy Chamberlain revisited”.

She said recently she saw two dogs peering through her bedroom window.

Blue Mountains Crime Manager Scott McAlpine said “we have had no reports in relation to wild dogs roaming the area and no reports to the police in respect to children getting attacked”.

A council spokeswoman said “council is working with Local Land Services and NPWS in regards to this serious matter”.

Last week Cameron Chaffey, the acting director of Blue Mountains NPWS, said residents in Glenbrook were letterboxed about wild dogs. Euroka Clearing campground has reopened after COVID-19 restrictions eased, which has led to the dogs moving on. Some baiting is occurring in Glenbrook, but trapping is the method in Wentworth Falls due to restrictions around baiting in urban fringes.