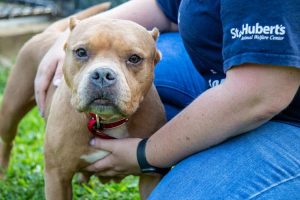 Kim Wolf had plans to visit her grandma at a nursing home in Maryland. Then, the global pandemic hit.

While COVID-19 has ground much of the world to a stop, the disease caused by the novel coronavirus has hit group home settings particularly hard, especially those with frail or infirmed residents.

With her trip up north canceled, Wolf started thinking about ways she could still “visit” her grandmother — and maybe cheer up other residents in the process.

Wolf had been in the middle of a Zoom call with dementia patients and their caregivers for work when her dog, Rosalynn Carter, a pit bull with a sweet face, hopped into her lap and demanded attention.

“I felt bad because it totally distracted the conversation,” said Wolf, who is pursuing master’s degrees in social work and public health at the University of Georgia. “As soon as they saw her, other people started holding up their pets, too. At one point, the screen was just a bunch of people holding up their pets.”

The excitement gave her an idea: What about using Zoom for virtual pet visits? During her more than 15 years working with older adults and caregivers, Wolf had seen how residents lit up when she brought therapy dogs. So she decided to pilot the project with her grandmother’s facility, where residents were used to seeing in-house therapy pets weekly.

Wolf recruited friends from the Animal Farm Foundation, a New York-based nonprofit dog rescue that trains shelter dogs to be free service dogs for people in need. With them came dogs, cats, horses, goats and cows.

“You could see the excitement in the eyes of our residents,” said Roya Najafali-Brooks, the activities director at Genesis Multi-Medical, where Wolf’s grandmother lives. “Pets seem to bring them much joy when in the building, so with the current situation, it is a great opportunity for them to be able to still have this pet interaction.”

The virtual visit was a success, and it got Wolf thinking that maybe this experience was something sorely needed in other group home or health care settings that are currently on lockdown.

“One of the residents was so excited that she was kissing the iPad because she wanted to kiss the dog,” Wolf said. At that moment, Wolf thought to herself, “I think we’re on to something!”

Pairing with Animal Farm Foundation, Wolf established Pets Together, with the goal of providing visits on a bigger scale. Using video chat services, Pets Together has held more than 100 virtual visits since its launch in March. Another 100 appointments are already scheduled for the next month. Currently, Pets Together offers appointments only to people living in group settings or working on the front lines of the pandemic, but Wolf said she anticipates expanding in the future to provide visits to people who are living in their own homes but unable to get out much due to health reasons.

“There’s some really powerful research that shows that experiencing chronic social isolation and loneliness is just as bad for premature mortality as smoking 15 cigarettes,” Wolf said. “As a public health student, I’m always trying to think about new and innovative ways that we can reduce social isolation and loneliness, especially in older adults where consequences are more dire. This was a way to try and do that and buffer the effects of isolation.”

Wolf is also designing a research study to measure the effects of Pets Together and to see whether the program is something that could be replicated on a bigger scale.

In the meantime, she and her canine Rosalynn Carter will keep dropping in on the people who most need a pick-me-up.

“Being able to do something that helps other people is awesome, but I get as much out of this as they do,” Wolf said. “And I think Rosalynn enjoys it, too.”