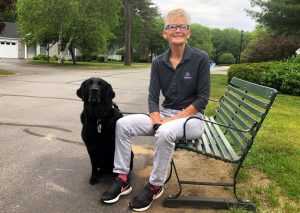 The 2006 rocket attack in Afghanistan that severely injured Gretchen Evans represented something of an ending for the U.S. Army command sergeant major, who awoke to be informed by a medic’s message on a dry erase board that she’d permanently lost her hearing.

But the tragedy also marked a new beginning for Evans, a woman packed with a strength and resolve that belies her 5-foot, 3-inch, 100-pound stature. She saw a challenge to be overcome, and with the help of Aura, a trained hearing service dog, Evans said she “went from being a blown-up deaf person to a person who now feels safe and secure in the world.”

Evans, who moved to Brunswick this year with her husband and Bowdoin College alumnus, Robert, has gotten a well-deserved amount of limelight over the years, appearing on “Megyn Kelly Today” and “Courage in Sports,” a TV documentary that profiled badly-injured veterans, and penning “Leading from the Front,” which covers her time in the Army. But now it’s Aura’s turn, Evans said. She entered the 7-year-old black Labrador/golden retriever mix into the national 2020 American Humane Hero Dog Awards, and of a pool of 408 canine candidates, Aura emerged as one of 21 semifinalists, including “Dolly Pawton” of Naples. Aura is one of only three in the guide/hearing category – one of seven total categories – and the top dog is to be featured in the Hero Dog Awards Broadcast, to be broadcast sometime this fall on the Hallmark Channel. “The American Humane Hero Dog Awards are our way of honoring the best of our best friends,” noted Dr. Robin Ganzert, American Humane president and CEO. “This unique effort brings attention to the life-changing, life-saving power of the human-animal bond.”

The awards, sponsored by the Lois Pope LIFE Foundation, “celebrate America’s often unsung heroes,” Pope said. “From those who defend our country to those who help us heal, guide us, protect us, and help find the lost, every single contender exemplifies the courage and heroism we seek to spotlight in this campaign. Our goal is not only to honor these magnificent dogs but to inspire America to reflect on the outsized contributions that animals make in our lives each and every day.”

Thanks to therapy she had in the year after becoming deaf, Evans speaks clearly and read lips well. Accents can be problematic, because words are formed differently, and beards can make lip-reading difficult, too.

“It’s like learning a foreign language, almost, because you’re really translating,” said Evans, who is due to be a guest speaker at Brunswick’s Veterans Day dedication of its Veterans Plaza.

Refusing to think of herself as disabled after her injury – which ended her 27-year Army career and left her struggling to find work – Evans navigated an all-silent world without a guide dog for nearly 10 years. Veterans Affairs set her up with devices to compensate for her lack of hearing, like a light that flashed when the doorbell rang, and a vibration in her mattress that would wake her up when the alarm went off. But “once I left the house, I was a deaf person again,” she said.

Two scares made Evans realize she needed more help. At a hotel for her husband’s conference, she was in the shower when housekeeping knocked repeatedly on her door, and both parties were mutually shocked when they met in the bathroom.

Another time, Evans was jogging down the street, and didn’t hear the bicyclist on the sidewalk behind her say he’d be passing on her left. The collision threw her into the street, and the Mercedes that slammed on its brakes stopped inches from her head.

The doctor at the hospital told her she’d have to stop doing the things she used to do. Evans felt an empty pit in her stomach, the latest dose of bad news in a struggle since the missile attack that had brought her a brain injury and post traumatic stress disorder.

“I felt like if I didn’t stick my foot in that closing door, I was going to lose myself,” Evans said. “I was beginning to think I was running out of options.”

She emailed her story to America’s VetDogs, which to her great relief informed her that while it had never before trained a hearing dog, the organization would find a way to do so for her, and provide the canine free of cost.

Evans was paired with Aura, who she calls “a fur guardian angel,” five years ago.

Curious, and packed with energy and intelligence, Aura will nudge Evans if she hears a sound she’s been trained to tell her handler about, like a doorbell. Evans asks Aura, “where’s the sound?,” and her companion will take her to the door, the microwave, the washer and dryer, her cell phone if a text message has arrived – wherever the sound has occurred. If an emergency vehicle blares a warning while Evans is driving, Aura lets her know.

Aura stands to her rear, so nothing coming up from behind Evans will startle her. They go on hikes together.

“She’s given me back my independence,” Evans said. “I don’t consider myself a deaf person anymore; I have ears. Aura is my ears.”