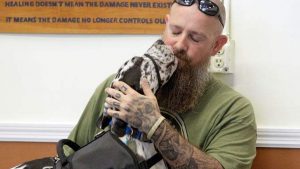 Amid recovery efforts against the COVID-19 pandemic, Americans were stunned last month by the horrific death of George Floyd in Minneapolis, who was killed while in police custody. Sadly, the subsequent protests, riots and looting in cities from Seattle to Miami to New York have increased chaos and divisiveness when our greatest need now is for authentic communication.

Understandably, some observers say we now suffer from “crisis fatigue.” While all of these issues and events warrant our full attention, at the same time, they cast a long shadow on other conditions as well, of which we should also remain informed and empathetic. Congress reminds us of this every year by designating June as “National PTSD Awareness Month” and June 27 as “National PTSD Awareness Day.”

American veterans with Post-Traumatic Stress Disorder (PTSD) can be easily forgotten. Many served their country and returned home bearing both physical and mental disabilities for which there is no cure. PTSD is often the most punishing and the national suicide rate among veterans with PTSD stands at 20 per day. Consequently, these veterans are unlikely to gather in groups to protest anything. They don’t seek photo-ops or press conferences.

The sad paradox is that veterans with PTSD who have the greatest need for help are often among the least capable of asking for it. That’s because they’ve been haunted by their own experiences and have been worn down by their flashbacks; nightmares; anger; depression; anxiety and resulting self-isolation. PTSD often has a profoundly adverse impact on their spouses and children too.

For decades veterans with PTSD have also been challenged by widespread public misperception about PTSD:

That it is a weakness.

That someone who suffers with PTSD should be able to “reason” through it.

That the person who suffers from PTSD is violent and unbalanced.

That no treatment works.

That veterans with PTSD are simply looking for a disability check.

In addition to these obstacles the “stay-at-home” restrictions from COVID-19 add insult to injury for those making the effort to find their path forward. At K9 Partners for Patriots based in Brooksville, we help veterans with PTSD, traumatic brain injury (TBI) and military sexual trauma (MST) with a free, 6-month training program in which we train the veteran to train a K9 partner to become his or her service dog. But, the current COVID-19 restrictions preclude us from interviewing new veteran applicants; or bringing in dogs to test them. We cannot yet conduct counseling sessions with individuals or groups such as our spouses group, or, the female veterans group.

Only those veterans in classes with their dogs may come in now, but the program’s alumni are advised against “dropping in.” This is their safe place and they miss the camaraderie. Ours is a “judgment-free” zone providing counseling, communication and connection.

We anxiously await reopening without restriction so that we may be fully available to our growing family of veterans. For them, please know that the scars of PTSD are invisible but just as real as the physical ones they’ve endured for all of us.