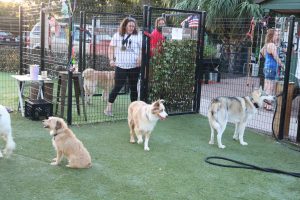 Local veteran organizations came together to celebrate veterans — and their canine companions.

Operation New Uniform and K9s for Warriors co-sponsored a Veteran Appreciation Night on Monday, July 20, at Brewhound Dog Park + Bar in Neptune Beach. The event gave veterans a chance to network with other veterans, and to learn about resources available to them.

ONU’s mission is to “train veterans and their families for fulfilling careers and develop their skills as they grow within an organization.” ONU was created in 2014 and has served nearly 300 veterans in its six years of operation.

Several other organizations were on hand to talk to veterans about services they provide that veterans may be unaware of.

One of the organizations, The Fire Watch, covers five counties across Northeast Florida, including St. Johns County. The organization’s goal is to end military veteran suicide by connecting veterans to available resources.

“The crux of our mission is we believe if we can engage veterans earlier, we can reduce the rate of veteran suicide,” said Nick Howland, executive director of The Fire Watch.

Howland said the COVID-19 pandemic makes veteran resources even more important, as socializing and other means of communication have been minimized.

“Isolation is a warning sign,” Howland said. “Homeless veterans are five times more likely to attempt suicide. The COVID crisis has aggravated what was a already a problem.”

Another organization on hand was the Steven A. Cohen Military Family Clinic at Centerstone. The Cohen Veterans Network is a nonprofit that supports the veteran population by offering accessible, high-quality mental health care services.

“We take the time to talk to them and find out what they need,” said Diane Stover, case manager for Cohen.

Stover said events like the one at Brew-hound are incredibly important because it gives veterans the chance to not only find out about resources, but to share the information with fellow veterans.

Veterans at Monday’s event were also able to enjoy Brewhound’s wide selection of beer, $2 tacos and the joy of seeing their animal friends play. There were also adoptable dogs on hand for anyone who didn’t have one —or wanted another one.

Few organizations combine veterans and dogs like K9s for Warriors, which is the nation’s largest provider of service dogs for disabled American veterans.

“It’s critical to get veterans together so they can speak with each other, get out of the house and into the world,” said Rory Diamond, CEO of K9s for Warriors and Jacksonville City Council member.

Veterans can be gainfully employed, doing their regular routines, and still be in crisis and not reaching out, Diamond said.

“There’s nothing more powerful than well-informed veterans to help their brothers and sisters,” Diamond said.