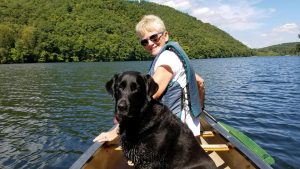 Without Aura, Gretchan Evans’ life would be bound by the borders of what she couldn’t hear.

“Aura saved my life by giving me back my independence. Also, she became my always available and capable partner in all the things I love to do. Hike, run, paddleboard, kayak and almost anything outside,” said Evans, a 59-year-old Army veteran who lives in Brunswick. “She made me whole again. I fit back into a world that previously I felt awkward in. She enhanced my life beyond measure.”

Without her dog Dolly Pawton, Amy Sherwood of Naples would have trouble with even basic tasks: turning lights on and off, picking up packages, getting her wheelchair. Every time Sherwood left the house alone, she used to worry she’d pass out and no one would be around to help; now Dolly fetches help.

“She’s done so much for me that I wanted to show the world what service dogs could do for people,” said Sherwood, who is in her early 40s.

Evans and Sherwood consider their dogs heroes. And soon the rest of the world may, too.

Aura and Dolly are semifinalists in the 2020 American Humane Hero Dog Awards. Dolly is one of only three dogs in the nation in the service dog category. Aura is only one of three in the guide/hearing category. If they get enough online votes to win their categories, they will compete with six other dogs for the title “American Hero Dog.”

“She is so deserving,” Evans said of Aura. “She never has a day off, she has worked every day I have had her. She puts me before her own needs. She always works with happiness.”

Evans, a former Army sergeant major, was serving in Afghanistan when she was struck by a rocket blast more than a decade ago. She suffered a traumatic brain injury and was in a coma for days. When she woke, she discovered she’d lost all hearing.

For the next five years, she said, “life was very challenging.”

“The Veterans Administration set up my house to help me with lights for when the door bell rang and devices to vibrate under my mattress to wake me instead of an alarm I could not hear. But the minute I left my house I was back to being deaf again,” she said. “I had a hard time finding employment due to my injuries and (a hard time) enjoying the hobbies I had prior to my injuries. So I was struggling with my deafness. I did not want to have to give up doing things I loved. I did not want to become dependent on others.”

Then Evans received Aura from America’s VetDogs, a New York-based nonprofit that trains and places service dogs with veterans, active-duty service members and first responders. Aura, a Labrador retriever/golden retriever mix, was the group’s first hearing dog, and her training — and match with Evans — was perfect. “After five-plus years together she reads my mind almost,” Evans said. “She knows when I need just a gently laid head on my leg for comfort. She knows my routine and can anticipate things in advance.”

Aura, 7, alerts Evans to all sounds: doorbells, text message alerts, sirens when Evans is driving or running, people coming up behind her. And, once, a bear.

“We were solo tent camping in Colorado, just Aura and me. A bear came very close to our tent and Aura gently woke me up to let me know the bear was out there. She did not make a sound knowing we could be in danger,” Evans said. “After the bear left she curled up next to me to lower my anxiety and stayed awake all night.”

And then there’s the help that has nothing to do with sounds.

“Aura also performs nightmare interruption,” Evans said. “When I have a nightmare, she wakes me by pulling off the blanket or sheet first, if that does not wake me she nuzzles me, and if I am still not awake she gets on the bed and lies on my chest. That always wakes me up.” “She is devoted, loyal, never says no to the tasks that are required of her,” Evans said. “She has hiked 14,000-foot mountains with me, swam in the ocean, she answers the door even when she is tired. She wakes me up from nightmares which means she even when resting is thinking of me. She has devoted her life to making mine livable and better. She ensures I am safe always.”

Sherwood, too, believes her dog is a hero. Dolly, a 3-year-old Labrador retriever, is trained to alert when Sherwood is having cardiac problems. Because Sherwood uses a wheelchair, Dolly also picks up or retrieves objects for her — including her wheelchair, which has a leash attached to it so Dolly can grab and pull.

“And then she’s not a PTSD dog, but she definitely serves in that realm,” said Sherwood, referring to post-traumatic stress disorder. “I’m not comfortable around men at all. With Dolly, she kind of puts a boundary between people. She makes it that if they come in a space that I’m not comfortable with, she makes me more comfortable or she makes them aware, ‘OK, you need to back off.’”

Dolly has meant so much to her that Sherwood has written and self-published two children’s books featuring her. She and Dolly also give service dog presentations at schools.

“I never thought a dog that I was getting for medical reasons would change my life as well as changing other people in the world’s life,” Sherwood said. “So many people are excited to hear her story and hear the things she does.”

“She is serious about her work, but has whimsical moments when she does silly things,” Evans said. “Because she is so smart she figures out things quickly, like she knows how to help herself to a piece of ice by pressing on the ice dispenser on the refrigerator. She will eat whatever I am eating if necessary.”

The American Humane Hero Dog Awards is sponsored by the Lois Pope LIFE Foundation and will be broadcast nationwide as a two-hour special on Hallmark Channel this fall.

People can vote for their favorite dog in seven categories, and votes can be cast once a day at Hero Dog Awards. org  until July 16. The top dog in each category will appear on the two-hour television special. One of those seven will be named American Hero Dog.

Because Aura and Dolly are semifinalists in different categories, they could both end up on TV.

“I really hope that we both make it,” Sherwood said. “To have two dogs from Maine represent would be amazing.”