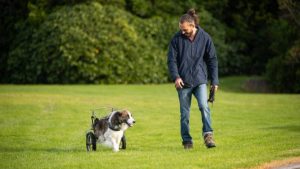 Martín García Cartagena recently completed his doctorate degree and believes he wouldn’t have been able to do it without his beloved, two-legged dog, Chicha, by his side.

García Cartagena moved to New Zealand from Uruguay nearly five years ago to start his PhD in resource and environmental planning through Massey University, and based his decision to move here on where would be best for Chicha.

It was never an option to leave her behind. García Cartagena found Chicha as an abandoned puppy in Uruguay about eight years ago and not long after she was hit by a truck, displacing vertebrae in her spinal cord and paralysing her back legs.

Chicha needed expensive surgery and García Cartagena was concerned she wouldn’t have the same quality of life.

“The vet said ‘she will have the same quality of life but it’ll take you a bit more work to help her get that’.”

Six months after the accident, and after surgery and multiple X-rays and tests, Chicha was able to walk again with the help of a cart and wheels.

It was a long and expensive process to bring her to New Zealand, but well worth it, he says.

They now live in Okato, Taranaki where Chicha has developed a bit of fan club.

When Covid-19 hit and García Cartagena decided he and Chicha would lockdown with his partner in another town, Okato residents worried something had happened to them.

In the conclusion of his thesis, on community resilience in the aftermath of the Canterbury earthquakes, García Cartagena penned a touching tribute to Chicha.

“I would like to express my eternal debt of gratitude to Chicha. I would not be who I am, I would not be where I am, and I would have definitely not have completed this PhD if it wasn’t for her and her way of teaching me on a daily basis that everything and anything is possible with love, commitment, and hard work.”

García Cartagena did not get Chicha specifically as an emotional support animal but increasingly dogs are being trained for these purposes.

“While he’s writing his thesis, which can be a lonely place to be at a desk, just having that dog to come in the room and pop their head on your lap is enough to lift your spirits and get on to the next chapter.”

Isaacs uses labradoodles as they are hypoallergenic so people who are allergic to dogs can still have one, and they also have ideal traits such as being affectionate, loyal, and calm.

“They have to be confident with whatever is thrown their way, which could be kids vocalising with autism, and they have to get used to meltdowns which can be loud.

“Their job is to run towards crying and any noises kids make, and we turn it into a game.”

Up until two years ago, New Zealand didn’t have therapy dogs, there were only support dogs available for the blind, deaf, and epileptic.

But Isaacs says since they have become available, there has been a surge in interest.

Post-Covid, enquiries to her business have doubled and are continuing to increase.

A therapy dog costs $13,000, but she says a lot of it can be funded through Lottery Grants and other trusts, as well as Givealittle.

“They feel so much safer with a dog and feel like they can do it with a dog, but they couldn’t do it on their own.”

Patrick Neilands, a PhD student from the University of Auckland, wrote his thesis around dog’s social cognition and how they navigate social situations with humans.

Part of that bond is due to eye contact, Neilands says.

He says humans engage in a lot of mutual eye gaze whereas in most other species it’s considered a threatening gesture however, dogs can stare into their owners eyes for quite a long time.

Neilands says a study called this ‘eye gaze oxytocin’ and showed when the dog stares in your eyes you get a dose of oxytocin, often referred to as the ‘love hormone’.

“As a dog owner I am aware it adds to my wellbeing, whether that is measured in terms of decreased blood pressure or decreased stress levels, I couldn’t tell you.

“But I know that with my dog back home in Ireland I miss her, and she improves my quality of life, even though it’s hard to measure that.”