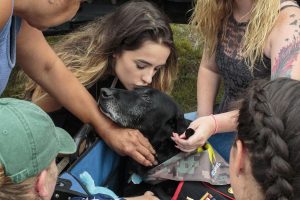 Veterinary researchers at Mizzou have had such success with a new immunotherapy approach for bone cancer treatment in dogs, the results have now helped secure FDA approval to test the method on human brain cancer patients.

In collaboration with the biotech company ELIAS Animal Health, scientists treated 14 dogs with a personalized vaccine made from each dog’s cancer cells. They then boosted the animal’s immune response by removing the dog’s own white blood cells, growing them in a lab, and then reinjecting them into the dog to attack the tumors. Early results suggest the treatment allows dogs to live longer than standard care.

“It’s very clear that the approach caused an immune response that extended these dogs’ lives substantially,” said principal investigator Jeffrey Bryan, a professor at the University of Missouri’s College of Veterinary Medicine.

Osteosarcoma, a type of bone cancer treated by the scientists, is the most common type of bone cancer in dogs. Dr. Rhonda Feinmehl, an expert in veterinary oncology at the Veterinary Specialty Center in Buffalo Grove, Illinois, said it makes up 85% of bone tumor cases.
In large dogs, the tumor often appears in the limbs and grows rapidly and aggressively. Not only does the local bone cancer limit the dog’s ability to move, but it also quickly spreads to other parts of the body. “By the time we diagnose osteosarcoma, it is often already microscopically spread,” Feinmehl said.

Currently, the average dog with osteosarcoma will live four to six months if the tumor is removed surgically and up to a year if the surgery is followed up by chemotherapy.

“In spite of several decades of mixing and matching chemotherapy drugs for dogs with osteosarcoma, we really haven’t moved the needle on extending their lives substantially compared to what we were doing 20 or 30 years ago,” said Bryan. “The chemotherapy helps but only to a limited extent.”

But immunotherapy trains the body’s own immune system to recognize cancer and attack it, stopping the spread of cells gone rogue.

One way to do that is to inject a patient with a vaccine made out of the patient’s own tumor cells. Cancer cells collected during the surgery are sterilized and irradiated to make sure they cannot divide further, mixed with potent chemicals producing a strong immune response, and injected back into the patient’s body. Over the next several weeks, the patient’s immune system starts to produce immune cells that are trained to recognize cancer with great precision.

Unfortunately, the body’s own response is often not enough to stop cancer from spreading. The novelty of Bryan’s and ELIAS’s approach lies in their decision to harvest cancer-recognizing immune cells, grow and activate them outside the body, and re-infuse those cells back, hoping they now can recognize cancer more efficiently and kill it faster.Compared to an average survival time with amputation and chemotherapy, the dogs that underwent Bryan’s treatment lived several months longer. Five lived for over two years after they started their treatment.

It is still too early to tell precisely how much better this treatment is compared to standard care, but ELIAS is enrolling canine patients to test the therapy in a big trial with centers across the country.

Feinmehl said she is excited to be a part of the new study. Feinmehl’s center had already treated three of their canine patients using ELIAS’s approach and said that they have tolerated the treatment well. The center is currently enrolling new patients as a part of a clinical trial.

“It is the first study of this kind that doesn’t require any chemotherapy as part of the treatment protocol. It also doesn’t rely exclusively on a vaccine,” said Feinmehl. “Our immune system had evolved over tens of thousands of years, and a prospect that instead of using a poison we can harness the body’s own immune system to help fight cancer and do what it’s supposed to be doing is exciting.”

The approach may also benefit human patients with rare, aggressive and incurable cancers.

Dogs’ and humans’ immune systems are uncannily similar. Tumors in both slowly condition their hosts’ immune systems to ignore them as they grow in size, said Bryan, the principal investigator. So using a patient’s own cancer cells as a vaccine to stimulate the immune system should translate between humans and dogs, he said. And, theoretically, if tumor cells have enough mutations to be recognized by the immune system, any type of cancer could respond to the treatment.

Bryan’s study helped convince the FDA to allow testing of this type of therapy in human patients with glioblastoma multiforme, a rare and aggressive form of brain cancer that is very difficult to treat.

Bryan said that Mizzou’s Comparative Oncology veterinarian group is interested in advancing technologies that not only can help companion species with their cancer, but also have the potential to help humans.

“We were very excited to partner with ELIAS on this and to help move the whole technology forward,” said Bryan. “[The study] turned out I think better than many of us have even hoped and we were really pleased with how well these dogs have done.”