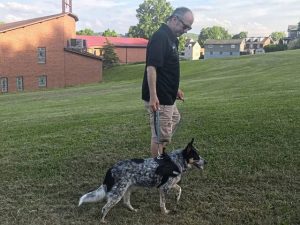 When Dan and Lisa Williams adopted Shep two years ago, they noticed he had a penchant for sniffing around cars.

The New Stanton owners are hoping their 3-year-old Australian cattle dog soon will be using his olfactory skills to recognize people infected with the coronavirus, as part of the new regional Covid-19 K-9 Detection Task Force.

“It’s kind of exciting to think that a dog can do that,” said Dan Williams, who plans to undergo training to be Shep’s handler.

Researchers in Great Britain, Florida and eastern Pennsylvania are looking to train canines to provide warning of covid-19 infections. The new task force wants to achieve the same goal with a cadre of 10 dogs and handlers in Southwestern Pennsylvania.

Shep made the cut from among 168 area dogs recently tested for suitability as trainees. He and his owners were recognized at this week’s meeting of the Youngwood Dog Club, where Dan Williams was installed as vice president of the local nonprofit.

The Williamses took Shep into their home after he turned up as a stray in New Alexandria.

“He would go around cars and smell the inner fenders and around the doors,” Dan Williams said. “I always wondered if he’d been in some kind of training for a K-9 (police) dog.”

With his current owners, Shep has been trained to visit schools and nursing facilities as a therapy dog.

“He really does a good job with that,” Dan Williams said, so, “we thought we’d try him with the covid-19 training.”

During the dog candidate testing, Lisa Williams said, “I think they were looking to see if he would smell where food was when they removed it and put it somewhere else. They wanted to see if he had the ability to problem-solve and know to look for where it was without anybody telling him.”

The task force commander, Rodney Little, acknowledged the difficulties that Shep and the nine other dogs overcame to qualify as covid-19 detection trainees.

“The hardest part about the test is you can’t tell your dog what to do,” said Little, who turned over presidency of the Youngwood Dog Club to Billy Cowherd. “They have to let their brain take over and work.”

The plan is for Shep to undergo six or more weeks of training for covid-19 detection while Dan Williams completes one week of handler training.

First, Little said, the task force is looking to raise some money. It received about $800 in donations, but he figures it will cost a little more than $1 million to initiate the task force team and keep it in a state of readiness for a year. He said grant applications are being readied to submit to organizations such as the Centers for Disease Control and Prevention.

Ultimately, Little would like to have trained dogs ready to provide covid-19 detection in such public spaces as courthouses and airports.

“If the virus goes away, our task force team will not,” he said. “Our team will be trained and ready to deploy for any threat needed. They’ll be able to smell things such as explosives and guns.”