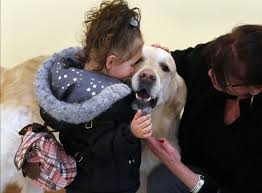 The Rhode Island judiciary began working with Windwalker Professional Pet Assisted Therapy to bring therapy dogs into the McGrath Judicial Complex in South Kingstown at the urging of Family Court Magistrate Paul T. Jones Jr. and his wife, Linda, both of whom sit on the Windwalker advisory board. Now the program is expanding.

Two-and-a-half-year-old Alaya has been a little stressed as her parents have faced off in Family Court, her grandmother says.

That changed Monday morning when Alaya encountered Ben, a golden retriever who will celebrate his fourth birthday Wednesday.

A thrilled grin spread across Alaya’s face as Ben came in for a kiss, followed by a squeal.

Ben and his owner, Amy Rajack, made rounds in the hallway outside Family Court Monday at the Philip W. Noel Judicial Complex as part of a trial program testing out the presence of trained therapy dogs in proximity to some of the most volatile conflicts playing out in the Ocean State. Family Court is often the battleground in divorce, child-support and domestic-violence cases.

“She’s so stressed out,” said Deb Quintero, of Warwick, as the winsome toddler clung to her hand.

“Dogs do help. It’s nothing but unconditional love. It relaxes,” she said of her granddaughter.

The Rhode Island judiciary began working with Windwalker Professional Pet Assisted Therapy to bring therapy dogs into the McGrath Judicial Complex in March at the urging of Family Court Magistrate Paul T. Jones Jr. and his wife, Linda, both of whom sit on the Windwalker advisory board. The couple brought the idea to Family Court Chief Judge Michael B. Forte after learning the success of courthouse dogs in Seattle.

Forte and Supreme Court Chief Justice Paul A. Suttell agreed to give it a try.

A two-month trial at McGrath proved a success, so the courts agreed to embark on another trial run in Kent County beginning in December. Now, teams of Windwalker therapy dogs and their owners visit the Kent Courthouse on Monday and Thursday mornings. They are at McGrath on Tuesdays and Wednesdays, where they interact with all types of litigants in the one-story courthouse, though their focus is Family Court.

The volunteers enroll in a three-semester continuing education program at Providence College to earn their credentials. The first semester concentrates on ethics, classroom work, and book learning. The dogs are brought in in the second semester to concentrate on temperament and working with their handlers. The final term is the practicum, in which the teams head out into nursing homes, classrooms and other venues, Linda Jones said.

The Windwalker facilitators propound the therapeutic benefits to people, animals, and society of programs based on the human/animal-companion bond. The group’s mission is for pet-assisted therapy to be integrated into health care, rehabilitation, social services, and education. They believe that the pets are parts of a family first.

“The owners know what populations their dogs work best with,” Linda Jones said, adding that not all teams make it through.

All volunteers must undergo a background check and provide insurance to participate in the court program, said Craig Berke, spokesman for the courts.

Ben was joined Monday by Phoenix, a Keeshond, with his owner, retired reading specialist Elizabeth Tierney.

Tierney told of Phoenix recently walking up to an agitated man who smelled of alcohol.

Ben and Phoenix greeted passersby Monday with a wag of the tail and a smile, if dogs could smile. Litigants stretched out hands for a pat, as did lawyers and court staff.

“He literally thinks everyone wants to pat him whether they do or not. I thought I’d give him a job,” Rajack said of Ben, the golden retriever.

Tierney recalled a boy with few verbal skills responding to Ben in a classroom, speaking word after word.

“He made the situation a little better,” she said.

Linda Jones has high hopes for what pet-assisted therapy can bring to not just Family Court, but perhaps to other courts as well, such as the veterans’ calendar.