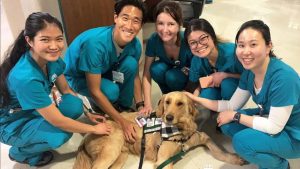 On this day, Griffith got play with Professor nearby in Central Park.

“It can be rough because I have to go to the doctor and get an IV to get fluids,” she told us. “That’s not pleasant so the dog actually helps. It makes me feel happier and I’m focused on the dogs and not my pain.”

Mount Sinai launched the program three years ago for children undergoing treatment. In recent months, Professor and his two co-workers, Moby and Amos, have been visiting patients virtually.

But when the coronavirus crisis erupted, the dogs also took on new roles: comforting and calming stressed-out health care workers who are on the front lines of the pandemic.

“He was right there with us, he was a front line worker,” Dr. Pallavi Madhusoodhan told us. “He never missed a single day. That helps get us to feel more normal it makes you feel happier.”

“It was just so stressful and scary to see all of that and then knowing when I came to work at least I had the Professor,” said Natali Carpio, a nurse who works at the Mount Sinai Kravis Children’s Hosptital. “He doesn’t judge you; he’s just there for you to love him and pet him and play with him. He was such a de-stresser, stress reliever.”

The need was so great, handler Marianne Porzelt has taken the dogs throughout the Mt. Sinai system, bringing them to meet with health care workers in break rooms and other hospital settings.

The hospital is doing a clinical study on the effects of therapy dogs. Anecdotally, it’s pretty obvious.

“I think they changed the morale in the hospital,” said Porzelt. “I think we all underestimate the power of a dog the power of petting a dog and spending time with the dog and just  having normal conversations.”

Like Kayla and other patients, many health care workers now say on the days they found it difficult to face work at the hospital, Professor and his partners made the difference.