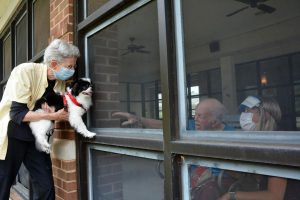 Social opportunities have been highly limited for NHC HealthCare residents in the past three months, as nursing homes around the country have cut off the flow of visitors due to the coronavirus pandemic and its especially lethal impact on senior citizens.

Wednesday’s NHC traffic, however, included some two- and four-legged visitors who got as close as they could without sparking any medical alarm. Therapy dogs were part of the scene, as they were June 17, approaching screens at a sunroom and allowing residents to reach out and at least get their hands sniffed by the pooches on duty and share some thoughts on canines and whatever other topics come to mind.

Arnett said she appreciated the chance to have an in-person visit, rather than a “virtual” encounter, via computers and phones.

“I like it. We did the virtual ones, but it’s very hard to get feedback from people. It’s nice to see human reactions,” she said.

“The dogs don’t know to look at a phone,” Ealey said, noting that the virtual visit was interesting in terms of having involved someone dressed in full personal protective gear – gloves and a gown, mask and face shield – “running around the facility holding up a phone for residents to see the dogs.”

Conversations with residents in therapy situations, Arnett said, tend to focus on canines.

“If they want to ask questions, that’s great. Usually, they just want to tell you about a dog they had when they were younger or when they lived … independently.”

Ealey said she appreciated the fact that the NHC reached out to the therapy dog team to request a visit. She also addressed a misperception in the midst of the ongoing worldwide health crisis.

She pointed out that Trigger, now 10 years old, will reach his seventh anniversary as a therapy dog in July. He normally makes about three visits a week and has done more than 1,000 visits over the years.

“He has people that he’s been seeing for many years. They miss him, and he misses them.”

Trigger, who could be considered a senior citizen in dog years, also has some experience as a medical patient – not just as a visitor. He suffered a tear in his right rear leg’s ACL in late February, and has been on the rebound with help from two local vets: Dr. Eva Bogner, with Aiken Pet Fitness and Rehabiliation; and Dr. Holly Landes, with Eastview Animal Wellness, in Augusta.

Trigger’s past few months, while not landing him in a retirement home as a resident, have included such elements as prayer, acupuncture, pool therapy, laser treatments, Chinese herbs, heat and stretching at home.