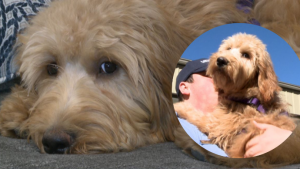 One dog is training to help first responders in Kentucky.

“It was a solution to find ways that we can support our employees through emotional support through something different,” explained Bert Absher, director of operations.

The team is composed of all standard-size hypoallergenic breeds like Goldendoodles, Labradoodles, and even a Sheepadoodle.

Now, a new dog named Jojo is a member of the team in Kentucky.

She is 22-weeks old and the newest addition to the global medical response team.

Absher told WYMT she will serve more than 1,000 employees.

Officials said some forget about first responders when talking about PTSD.

“It’s very hard to be unhappy around a dog of this type,” said Absher. “EMS is a high-stress job. We are finally recognizing that many of our folks have some form of PTSD.”

“Not just LifeGuard or AMR, we’ll service all of our first responders in Eastern Kentucky or where they need us to go. When we deploy, it may not be to an AMR operation. It may be somewhere that they have experienced a tragic event,” explained Absher.

Monday was her first day on the job.

She lives with Absher and his wife. As he works every day, she stays by his side.

One of her favorite tricks is a hug. Absher said she loves to be picked up so she can wrap her paws around your neck.

Jojo is therapy support dog number 23 across the nation and the first in Kentucky for GMR.

She is currently enrolled in a training academy in Lexington. After she completes this stage, she will begin to train with Canine Good Citizen (CGC).

Absher said they hope to have her ready for duty within 12 to 14 months.

Once her training is finished, she will be able to sense high-stress situations and high-anxiety among other skills.