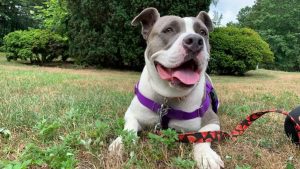 Willow, a 5-year-old therapy dog from Riverside, has won the title of 2020 “AmbassaDOG” for the Rhode Island Society for the Prevention of Cruelty to Animals.

“I’m so proud of her and everything that she’s accomplished in her life and I think she’s such a great representation of what you can adopt from a shelter,” Willow’s mother, Melissa Marszalek, told NBC 10 News during an interview at Roger William’s Park in Providence.

“There are so many dogs out there,” she said. Marszalek said she adopted Willow as a stray three years ago from Providence Animal Control. “I went down and met her and fell in love,” Marszalek said.

Since then, Willow has become a certified therapy dog, receiving her certification from Paws From the Heart. She is a member of the PVD Pups Program at T.F. Green Airport in Warwick, with her presence helping to calm and soothe passengers.

“I had no idea what her background was and she just blossomed into this very special dog,” Marszalek said.

“My friends and family fought so hard for her to win so we could show everyone how wonderful it is to adopt, how great pit bull-type dogs are and can be, and how loving and special they really are,” she added.

Through a recent photo contest that RISPCA held online, Willow helped raise $4,428 for the non-profit organization.

In total, contestants raised more than $14,000, with participants donating $1 per vote.

“We had 94 entries,” Connie Kile, who is the director of development and community relations for RISPCA, said.

Kile said Willow will be featured as part of RISPCA’s 18th annual Paws in the Park Dog Walk. It’s set for the end of September.

“We’re really excited to be hosting our event this year,” said Kile.

“And Willow is amazing,” she added. “She is absolutely adorable.”

Kile also praised Marszalek, noting that she serves as a volunteer for RISPCA, as well as Providence Animal Control.

In fact, Marszalek was awarded the “Animals Best Friend Award” from the Rhode Island Veterinary Medical Association in December.

“They have been doing a ton of work in the community,” Kile said of Marszalek and Willow.

But Marszalek said she and Willow love every minute of it. They are happy to help.

“I’m so humbled by it,” she said. “I’m so grateful to the SPCA and they’re going to do some wonderful things with the money.”

The dynamic duo plans to participate in the walk, which is set to be RISPCA’s first in-person fundraising event since the coronavirus pandemic hit.

Participants set their own goals raise funds for the organization.

“All those funds get pooled together for one big total,” Kile said.

Kile said the funds from the walk, as well as the photo contest, will be used for various community programs RISPCA offers.

While one program assists people in need get access to affordable veterinarian care, another helps anyone who has experienced an extreme hardship to temporarily board their pets in “a loving and safe” environment at a low cost.

“This allows us to keep pets and people together,” Kile said. “They get they help that they need so they can be reunited.”

Funds will also be used for their emergency pet food assistance program.

“We’re serving many families that generally wouldn’t need assistance but lost financial stability due to losing their job to COVID,” Kile said. “We also were delivering food to people who testing positive and couldn’t leave their homes. We are still going deliveries now.”

Kile, along with Joe Warzycha, who heads RISPCA, said they’re looking forward to the upcoming walk, especially since they had to cancel several other events due to COVID-19 limitations. They plan to follow the governor’s guidelines, such as mask-wearing and social distancing, for both volunteers and participants.

“We had to cancel our 150th anniversary celebration, so my fingers are crossed that we’ll be able to hold this one,” said Warzycha. “It will obviously be outdoors, and we will be well within the limitations on capacity. We’ll have less vendors and space them out more, and we can stagger start times for the walk.”

Kile shared similar sentiments, also noting that events like the walk are vital to RISPCA and the animals they serve.

“Most of our events have been cancelled or rescheduled, so we rely on fundraising events like this to provide programs and services to the community,” she said.

The event is scheduled at Rose Larisa Park in Riverside on Sept. 26, with registration starting at 10 a.m., and a Halloween Costume Contest for pets and their owners beginning at 11:30 a.m. The walk will kick off at noon, with the top fundraisers and contest winners announced immediately after.

“It’s important for the SPCA as a fundraiser, but it’s also important for the community,” Kile said. “Everyone enjoys being out and about, and this is definitely something that we missed over the last few months. I think it will be a great opportunity for people to just take a walk through the park, visit with vendors, and safely socialize with their dogs.”