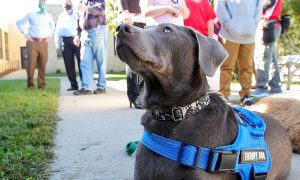 The St. Joseph School District received on Tuesday a grant to support a therapy dog program for local students.

The local Rotary International district, which is composed of three clubs, presented the grant valued at just under $2,500 to support the Behavior Animals Rescuing Kids (BARK) program focused at Coleman Elementary and Mark Twain School.

“The whole … importance of this, the reason it’s so valuable, is that we can interact with those kids and ultimately give them a better opportunity to learn,” Gladhart said.

Enter, therapy dogs Mo the silver Labrador retriever and Hope the goldendoodle. Teagen Stock, a Mark Twain student, is already in love with the dogs.

“Cause dogs are … fun and they’re kind of like, cute, and they’re so soft to pet,” she said.

Therapy dog trainer Monica Davis has finely honed her craft over some decades. She considers a dog, even untrained, to be a part of any healthy social unit. In a way, any dog can be a therapy dog. Davis is certified by the International Association of Canine Professionals to support the local therapy dog program.

“With these dogs especially, the kids just start calming down,” Davis said. “And they, they focus on the dog instead of their issues.”

Gladhart has seen the program change many student lives, and said he considers these dogs to have limitless potential.

“The amazing thing … to me is how effective it has been. We’ve got some great results,” he said.

According to the school district, the impetus for this program is driven by findings that nearly half of the nation’s children have experienced some kind of traumatic event, and more than 35 million total nationwide have been affected. Per state statute enacted in 2016, the Missouri Department of Elementary and Secondary Education provides trauma awareness information to schools. Local efforts to serve this mission have been in effect since 2009, the district said in a news release.

“A dog’s not really meant to be a couch potato,” she said. “I love a dog that’s in a job setting, and doing good work to help people. Both of these dogs love doing their work.”