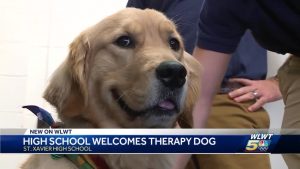 He’s about two feet tall, yellow and covered in fur.

The all-boys Catholic school has been buzzing with excitement to welcome Evan.

The 2-year-old golden retriever is the school’s new therapy dog.

“Seeing him in the hallway brings a smile to our faces and something to look forward to during the school day,” said senior Daniel Baptist.

Along with a few counselros, Jason Ahlers, asst. principal for student services, spent two weeks in training before Evan was introduced to the school last Monday.

“We have to remember that Evan is a working dog and when he has his working gear on, he wears a bandanna that says Circle Tail and has his name, that he’s treated one way. He’s not a pet here,” said Ahlers.

The school said it wants to support the health and wellness of faculty and students.

According to the Centers for Disease Control and Prevention, depression and anxiety in children ages 6-17 has increased.

“It helps to talk about it and understand we all go through it,” said junior Michael Niceley.

Therapy dogs are proven to reduce anxiety and stress and improve self-esteem.

If a student needs time with Evan, a trainer says, “Can you visit?” and the canine stays with the student who may need a moment of zen.

“Evan gives adults and students just the chance to be away from their job. For students, this is a serious job. They’re working hard to accomplish things and Evan gives them a little respite where they see him and light up immediately,” said Ahlers.

This is a pilot program in partnership with the Hamilton County Education Service Center and Circle Tail, a nonprofit organization whose mission is to provide service and hearing dogs to people with disabilities.

School officials will have conversations at the end of this semester about how things went and the best way to move forward.

The family of a student is acting a host family for Evan when he isn’t working at school.