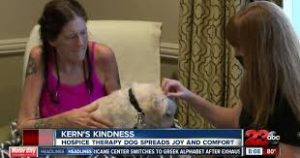 At Hoffmann Hospice, people receive end of life care and assistance in grieving loved ones who pass away. This is naturally a very emotional place to be, and one therapy dog is helping in such a wonderful way.

In this week’s “Kern’s Kindness,” meet Bernie and his owner Molly Mier.

“We adopted Bernie from a rescue in 2014 and we’ve been volunteering with Hoffmann for about five years now,” said Molly.

Four legs, and a big heart. Bernie is a therapy dog at Hoffmann Hospice. He greets people coming into Hospice, brightening their day and giving them a sense of comfort.

“We volunteer for the grief groups for both adults and children. So he kind of acts as a greeter when they come in. Gives them a sense of calm. And we also visit a skilled nursing facility here in town,” said Molly.

Molly said Hospice patients love Bernie, and he loves them right back.

“He loves it. Bernie loves people. He’s never met a stranger, so he just gets very excited whenever we get to go somewhere and see people,” said Molly.

“She thought Bernie would be a great candidate for therapy work based on his personality and his skill set,” said Molly.

And sure enough, Bernie picked up the training very quickly. The duo first tested to become a registered therapy team in March 2015, and they re-take the test every two years.

Molly said she loves watching the impact Bernie has on people’s lives.

“To see him to be able to have that positive influence on a lot people, especially people who are going through troubling times, is very rewarding,” she said.

Molly said her favorite memory with Bernie is when they were volunteering at a local hospital and they met a man who had been there for awhile. He was missing his own dogs back home.

“He just started crying when he saw Bernie because he was so happy to be around a dog,” she said.

Molly said she and Bernie look forward to volunteering with Hospice and the rest of the community for as long as they can, continuing to bring joy into people’s lives even during difficult times.