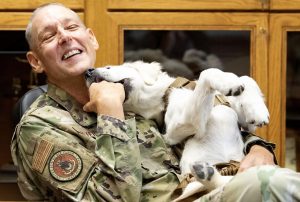 Lt. Col. Steve Peters was completely at ease during a Tuesday interview.

Granted, it didn’t involve tough questions on a controversial topic. But even if it had, it would have been pretty hard to be stressed out with a 35-pound puppy squirming in your lap and playfully nipping at your sleeves.

Peters, the wing chaplain at the 185th Air Refueling Wing, Iowa Air National Guard, hopes that Lincoln, one of the newest recruits on the Sioux City base, can help Air Guard members cope with whatever might cause them stress.

“He’s got all the traits that would suggest to me that he’s going to be successful,” Peters said of the base’s new therapy dog in training. One look at Lincoln’s cute face and you can’t help but feel better.

The 17-week-old English cream golden retriever has been here for just two months, but he’s already made dozens of new friends. Guard members, whether they need emotional support or not, make frequent stops at Peters’ office to play with the happy-go-lucky Lincoln. The interactions, even if brief, can lift a person’s spirits if they’ve got something on his or her mind. “My philosophy is 99 percent of people like dogs and puppies, they just bring a smile to your face,” Peters said.

Lincoln’s duties will involve more than brief meetings to brighten someone’s day. While Peters meets with people, Lincoln’s mission is to get involved, provide a distraction to decrease anxiety in the room and help people let their guard down and open up.

Certification training will take some time, but Lincoln has already shown his instincts in providing a calming influence. Peters shared a story about a person who came to his office and became animated while taking about a personal situation. Without prompting, Lincoln walked over and put his paws on the person’s lap, and the person calmed down immediately.

“It was as if he sensed that change in emotion and came over and said everything’s going to be OK,” Peters said of Lincoln’s reaction to the situation. “When you see it in real life, it’s just amazing to me.”

Those kinds of encounters are what Peters envisioned when he first approached base leaders about getting a therapy dog. While doing research for his doctorate degree four years ago, he learned of the benefits therapy animals can have. He thought that military members, who can face a variety of emotional issues, both professionally and at home, would benefit from having a therapy dog on the base. It can be harder for military members to seek help because of stigmas attached to seeking emotional or psychological help. Peters said because he’s an officer, that may be a barrier to some people. Others might worry that people will think there’s something wrong with them if it’s known they’re meeting with a chaplain or psychologist.

“My goal was to have a therapy dog that could break down barriers,” Peters said.

Peters’ request for a therapy dog was approved, and he obtained a dog in 2018. After about six months, it wasn’t quite working out, so another Guard member adopted the dog. Peters began to search for a puppy who could grow into the role and found a breeder who raises dogs to be therapy pets. Lincoln’s mom and dad are both certified therapy dogs as are other relatives.

With what he’s seen so far, Peters said, Lincoln appears to have inherited those caring traits, and Peters is confident that Lincoln will be certified and be a valuable therapy aide, providing unconditional love and a willingness to listen to anything. Just stroking Lincoln’s soft hair can give someone a feeling of calm. That’s the type of therapy Peters can’t provide.

“He can do things that I could never do in a million years as far as caring and having compassion for people,” he said.

As for those aforementioned stigmas, Lincoln gives those seeking help an excuse to come to Peters’ office. While popping in to play with a cute puppy, they’ve got cover to talk with Peters about whatever’s bothering them.

“Ultimately, you want a dog that loves people, is not anxious with people and will show love and affection without being overwhelming,” Peters said.

Lincoln checks all the boxes, Peters said, and even saves a little of his TLC for Peters, bringing relief to him throughout days spent helping others cope with their problems.