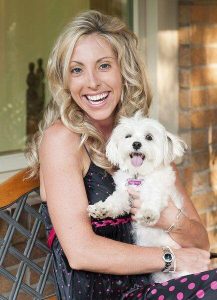 Victoria’s presence encourages elementary school pupils to read aloud in front of others.

Her companionship elicits smiles and nuzzling from nursing home residents. And her disposition, enhanced by a year’s worth of certification training, is to ignore sudden noises, her ears being tugged and nearby animals.

The 7.4-pound, nearly 1-foot-tall Maltese will accompany her handler to Butler County Community College’s Lawrence Crossing location in New Castle this month for a noncredit course that introduces students to therapy animals.

Victoria, likely the product of a puppy mill in Michigan, adopted by Allegheny County attorney Kathleen Vello in 2008 and certified as a therapy animal in 2013, will assist Vello’s presentation about the differences in certification processes and roles of service animals, emotional support animals, and therapy animals such as Victoria.

“A lot of people think, ‘My goodness. My dog would be so good at that,’” said Vello, Victoria’s handler. “And they very well might be correct. But it is important for people to understand the different types of working animals. People will learn in the class that an innate positive disposition is a quality that the therapy animal absolutely has to have.”

After becoming certified as a therapy animal by Animal Friends, Pittsburgh, Victoria has helped elementary school pupils to read aloud in front of others, Vello said, adding that “There are a lot of studies that show that animals lower people’s anxiety and allow them to perform better in general.”

Victoria also holds the attention of nursing home residents, and is sometimes held herself, Vello said.

“I’ve had caregivers tell me before that the resident doesn’t smile often,” Vello said. “But when they see Victoria, she just makes them light up.”

Social distancing measures will be enforced to maintain a safe environment at all BC3 facilities.

Additionally, face coverings, such as a face mask or face shield, must be worn in shared spaces inside BC3 facilities and must cover the nose and mouth. Face masks are preferred, but face shields are acceptable.