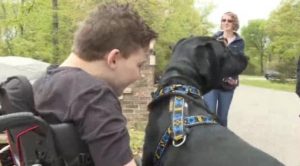 HIGHLANDVILLE, Mo. The sirens that filled the quiet, dead-end residential road in Highlandville brought a smile to the face of Billy Scott. He didn’t know that all the noise was actually the front of a parade dedicated to him, but he knew something was up.

On his 15th birthday Billy was getting something most of us never experience. A surprise drive-by parade with police and fire department representatives as well as 35 cars of teachers, fellow students and community members who wanted to say they missed that smiling face at Spokane High School where Billy is a freshman dealing with life circumstances most students aren’t.

“He has a very rare form of muscular dystrophy,” explained Cassandra Bray, a teacher at Spokane High School who works with Billy. “He’s been confined to a chair since he was eight years-old. It’s affected his eyesight and his speech greatly.”

After moving from the Kansas City area this is Billy’s first year at the school but it’s obvious he’s made a lot of friends in a short time.

“He’s honestly just the cutest little boy ever,” said Spokane senior Jordyn Rollings. “And it’s his humor. He knows how to make someone laugh. He likes to make jokes about your mom!”

“He has this kind of sass to him,” added fellow senior Josie Jordan. “When we tease him or say anything funny to him, his comeback is always ‘Your mom!’ It’s a good time! He’s the most inspiring student we have at Spokane. He has so many opportunities to not be happy but he’s grateful for what he has and is really a special kid.”

“Whenever I’m annoyed or sad I always think about how Billy could be upset about his life but I’m upset over nothing,” added Spokane senior Jacy Bray. “He’s always wanting to do something to make you laugh and that’s so awesome about him.”

“I think that’s the reason he clicks so well with a lot of these people is that he sees himself as normal,” said Nick Hooper, a teacher at Spokane. “He doesn’t want anybody to see him as the disability kid.”

“He’s very approachable and knows how to make others feel good,” added Spokane teacher Timothy Burden. “One of the funny things he’ll do is when we’re in the hallways and he’s not doing what he wants to be doing, he’ll sense someone around him and yell ‘Help!’ in a very ominous tone so we have to explain to the person that this kid in a wheelchair is fooling around and really doesn’t need help.”

As the parade came by his house Billy couldn’t see the cars because he is legally blind, but he could hear the constant honks of love and support.

And that sense of humor was very evident.

When asked what he thought when he first heard the sirens?

“I thought I was going to juvie,” he said in referring to a juvenile detention center.

He got several gifts from girl students and lit up when his service dog “Bear” came by in one of the cars. The two later had a up-close reunion as “Bear” is only with Billy when he’s in school, so the two have been separated during the coronavirus pandemic.

When asked who he was more excited to see, his service dog or his female admirers?

“The girls,” he said with a smile, laughing when it was pointed out to him that “Bear” was right there next to him and could hear everything he was saying.

At a time when our world is devoid of hugs and high-fives, it’s at least nice to hear that the word “drive-by” can be referring to something positive and that a honk can mean just as much as a caress.

“He’ll talk about this forever,” said his mom Amanda. “This will be one of the greatest things that has ever happened.”