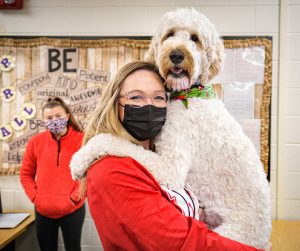 Ted, a 2-year-old goldendoodle, joined the staff at BHS as part of the school’s new therapy dog program.

“He just accepts everyone. Not one student feels like they can’t pet Ted because he won’t like them. Everyone comes up to Ted,” special education teacher Monica Maly said.

Maly and her family got Ted when he was just four months old.

“We just wanted a family dog” she said.

But after seeing his calm demeanor and suggestions from students to bring him to school, Maly began exploring the idea of using Ted as a therapy dog. She started with a basic obedience class.

“He craved going. He wanted to go. He loved going,” she said. “He had this separation of home and work. I knew it would be a good fit before we even pursued it.”

That’s when she approached then-BHS principal Tom Anderson, who already had interest in implementing such a program.

Following the obedience class, Ted had to complete the AKC Canine Good Citizen class, a six- to eight-week class that tested him on 10 different scenarios, including being around other dogs, accepting a friendly stranger, walking through a crowd and loose-leash walking.

“It was just a really intense class,” Maly said.

Ted passed, but because he was still so young, Maly decided to put him through the class again.

Maly then applied for Ted to be a part of the Edu-Pup program through Domesti-Pups in Lincoln. He worked with a trainer in Fremont for 10 weeks, finishing in July. He was then tested and placed on probation.

Ted was officially certified in October. That’s when he became a regular visitor to BHS, spending two to three days a week in Maly’s classroom.

“The kids have started picking up on his schedule,” she said. “He’s off leash. He can go roam at his pleasure.”

Ted has a calming effect on students in Maly’s classes, particularly to those who face anxiety issues.

“He’s just an additional tool to reach those kids’ needs and support them in a way that none of us can,” Maly said.

“If there’s just a day I’m struggling, he just kind of walks by and sits there and wants to be petted,” she said. “Today has been a little bit of hard day and he walked by and just gave me kisses.”

Ted also offers some relief during what has been a very stressful year due to the coronavirus pandemic.

“He has offered a point of physical touch and a friend that will come sit by your desk and be part of your group,” Maly said. “I think it’s just been a great thing this year because it’s way out of normal and no one could even imagine. But having him has helped them have something positive through this whole thing.”

Ted has become a benefit not just for the special education students, but all high school students.

This fall, Ted and Maly visited kindergartners at Deerfield Primary School. Maly said the hope is Ted can visit all of the primary schools once visitors are allowed again following the pandemic.