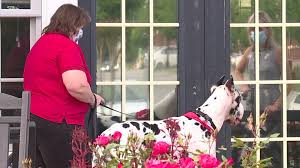 COVID-19 restrictions mean therapy dogs are no longer allowed in our hospitals or nursing homes, but Chance is still finding ways to keep people comforted and calm.

His owner calls him the “gentle giant.”

Chance is used to spending his time visiting patients and staff at Moses Cone Hospital and residents at Spring Arbor Senior Living in Greensboro.

But since the threat of the coronavirus, visitors have been shut out.

“It’s tough for him. He doesn’t understand why he can’t go in the door and see his friends,” said Pearce.

That’s why Pearce decided to find a new way to give back. She’s been sewing and delivering masks and surgical caps for health care workers.

“They look forward to us dropping stuff off, and they can see him through the car window or they can sneak a hug and pet now and again,” said Pearce.

At the retirement home, it’s hands and snouts pressed up to the window.

“Even now with this going on, it’s still giving them stress relief because they’ll talk about his visit for hours and days after he’s been here,” said Pearce.

Pearce says at the end of their visits it’s a tradition to stop by Freddy’s for ice cream to let Chance know he’s a very good boy.