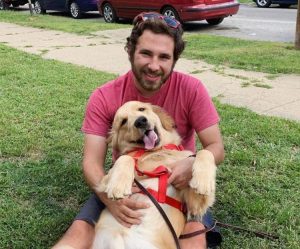 It is no secret that 4 Paws For Ability (4 Paws) has a large campus presence. Black labs and golden retrievers are walked around by their volunteer handlers, the pups sporting a red vest that indicates they are a service dog in training.

4 Paws is a non-profit organization based in Xenia, Ohio that gives children with disabilities trained service dogs to “provide increased independence for the children and assistance to their families.”

Alex Sprague is a second-year medical student at the University of Cincinnati (UC) and has been a volunteer with 4 Paws since he was a freshman neuroscience major at the Ohio State University (OSU).

With over four years of experience under his belt, Sprague serves as vice president of internal affairs for 4 Paws For Ability at UC.

“Like most freshmen, I wanted to enjoy my new-found freedom from the seemingly restrictive rule of my parents and instead of partying like crazy, I wanted to do something with dogs as I was never allowed to have one growing up,” he said.

As a volunteer handler, students like Sprague are responsible for training the puppies for basic obedience, house manners, basic to advanced service dog skills and socialization.

Socialization for these pups is easy to find on a college campus. Before COVID-19, it was hard to find a 4 Paws dog without college students melting over how adorable these canines were.

“It’s funny how if you’re at Clifton Kroger by yourself, no one would ever randomly come up and talk to you, but if you have an adorable service dog in training, people constantly stop and ask the dog’s name, say how cute they are and help socialize them by petting them,” Sprague said. “It’s great to share the mission of 4 Paws and raise awareness of the organization. Not to mention that I’ve had conversations with multiple people who have afterwards reached out to 4 Paws to inquire about getting a service dog for their child with a disability.”

A service dog in training has three possible outcomes after their time with college students: service dog, breed and fabulous flunky.

Sprague has had an array of experiences with his pups. One dog was chosen as a breeder and has produced three litters of soon-to-be service dogs in training. Three of the ones he has trained have flunked and have gone to homes across the nation, including Nebraska and North Carolina.

A golden labrador retriever mix he had trained went on to be a service dog for a young woman with epilepsy. The dog alerts the family when the girl is having a seizure and has even learned to notify the family before a seizure happens.

Currently, 4 Paws has a 90% success rate in service dogs’ placement to alert seizures when they occur, with most minutes to hours beforehand.

Josey Leach is a third-year student at UC whose family got a 4 Paws dog in 2007 for her brother Sam, who is autistic. Growing up, Sam had problems with running away and having outbursts in public.

“We heard about 4 Paws which has autism service dogs that can be trained to track the individual if they go missing and also help them calm down if they are frustrated,” said Leach.

John Boy is their black lab, a great companion for Sam.  “Sam’s behaviors improved a ton after we got John Boy,” she said. “He made It a lot easier for us to go out in public because of how comforting he was to Sam. We knew that if something were to happen, John Boy would be there to help.”

To this day, Leach’s mother is so happy she chose to get a service dog for Sam. She even blogged about her experience getting John Boy and how he has helped their family.

Although training a service dog can take up a hefty chunk of time, Sprague says that it is all worthwhile.

“It is quite the time commitment, but certainly worth it for both the bond you form with the dog and the possibility of your service dog in training graduating to full-time service dog and drastically changing someone’s life,” he said.