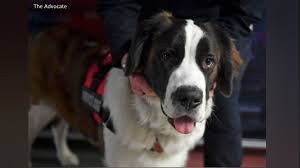 Many first responders in Louisiana’s capital city are often faced with high pressure circumstances that require quick thinking, an incredible level of skill, and the ability to compartmentalize.

But even the most competent emergency workers will, at times, find themselves shaken by an especially harrowing situation.

A recent article from The Advocate’s Jacqueline DeRobertis explained this is why East Baton Rouge Emergency Medical Services has taken on a new hire whose only task is to comfort EMS paramedics.

The new hire is a friendly St. Bernard named Indie.

As a nationally registered ADA service dog and PTSD dog, Indie is trained to help calm and support individuals who find themselves in emotional crisis.

Professionals who work in capacities that necessitate the carrying out of assignments under immense pressure, and even life-threatening circumstances, may get into a habit of suppressing their own distress so as to complete their work.

Leah Constantino, an EMS shift supervisor, explained that this is where Indie steps in to help. The dog is trained to sense when a human is in need of emotional support, and help them.

“A lot of times we don’t want anybody to see our weaknesses because we’ve got to remain strong,” Constantino told The Advocate. “With her, you can just be sad, and she’s gonna try to make you feel better.”

The idea of having first responders work with a service dog first entered Constantino’s thoughts in 2016, when Baton Rouge was rocked by the shooting of Alton Sterling, widespread civil unrest in response, as well as a deadly police ambush and a massive flood that left many residents homeless.

Paramedics were called to each disaster, and some were badly traumatized by the experiences, The Advocate notes.

Constantino explained that paramedics are often so used to putting their own emotional needs aside to focus on their jobs that they fail to cope with their own distress. This becomes manifest in a number of ways, such as developing depression and anxiety.

So, Indie began on a trial basis in early summer for a little more than a month.

The cuddly St. Bernard is now a uniformed officer with EMS, her call number is Indie 500.

The Advocate notes that dogs are great companions for people struggling with Post Traumatic Stress Disorder, according to the U.S. Department of Veterans Affairs. A recent study by Purdue University’s College of Veterinary Medicine also showed that service dogs helped to “disrupt episodes of anxiety.”

Constantino told The Advocate that Indie takes the emotions paramedics have attempted to compartmentalize and allows them to process.

“We will compartmentalize our emotions on tragic events and do what we’re trained to do, do what’s necessary, and generally it hits us after the call,” she told The Advocate.

Indie, who Constantino describes as smart and caring, will “almost immediately” approach the person who seems to be in the most distress after a bad call. She follows orders quickly, listening to her handlers with rapt attention and focus.

While Indie doesn’t join paramedics on calls, she responds after calls and often goes on social visits to other stations to boost paramedic morale.