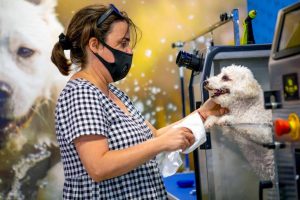 In the midst of a pandemic that is strangling many businesses, Grace Piney has found a way to reinvent herself.

“Times of crisis are also good times because they are times of growth,” she said. “These are the times when people have to invent solutions that may not have existed, or have to accommodate solutions according to the new conditions.”

For Piney, the innovation came with a bark: Lavakan, an automatic dog spa. It’s like a mini car wash but for pets.

At Lavakan, located at 2955 SW Eighth St., pets are placed in an automated machine that cleans and dries the furry animals.

The spa is completely self-serviced.

With the swipe of a card, pet owners can control the bath through a touch screen, which has instructions in six different languages — Spanish, English, French, Portuguese, Chinese and Italian — and options to customize the cleaning by indicating the size of the animal and the length of its hair.

The basic service, which includes bathing and drying, costs $20. But two treatments, ozone therapy and an antiparasitic rinse, can be added for an additional $5. Each service lasts from 20 to 30 minutes, depending on the size of the pet.

As members of Club Lavakan, customers acquire a code that allows them to open the business’ door at any time. In addition, by charging $100 on the membership card — equivalent to five basic services or four with ozone therapy and the antiparasitic rinse — they get a free wash.

Piney said the service is efficient, economical, fast and sustainable. It also allows the owner to not only control the selection of the wash, but also monitor their pet’s experience.

For Mary Castro, this was really the motivation to try it on Casper, her Maltese-mix, formerly stray, dog. After having a bad experience in a dog grooming salon, she was glad about being able to observe her pet during the whole process.

“They groomed him in one place and returned him with a damaged leg. After that I never wanted to leave him with anyone else while I wasn’t looking at him,” Castro said. “But this is a different thing that I had never seen until now. The good thing about it is that you can do the washing yourself because it’s self-sufficient and you don’t let him out of your sight.”

When he finished his spa service, Castro’s pooch seemed totally relaxed, at ease and almost ready to take a nap.

“He’s not heading straight to drink the water. That shows that he wasn’t overwhelmed and stressed out like he might have been at a traditional pet grooming,” Piney said.

Although Piney is a self-declared dog lover, she never imagined that life would lead her into opening a doggie grooming facility.

A philologist by profession, with a 20-year-long career working in media, publishing and international politics, Piney found herself at a crossroads when she left Martí Noticias, the government-funded news outlet.

“I was left in the air at that point,” Piney said. “Well, nothing, what I thought was ‘I’m going to have to create a new business.’ ”

She conducted market research for several ideas, including toy stores and boutiques, which were gradually dismissed. However, Piney finally found her new project by taking care of a friend’s Labrador and Boxer.

“She asked me to look after them and when I arrived they smelled horrible. I told her I was going to give them a bath, but she said, ‘They’re not going to let you, look at how big they are,’ ” Piney said.

Although she was warned it would be a “battle,” Piney discovered it was just the opposite.

“I said, ‘But they’re behaving so well, they’re super comfortable. I thought, ‘Hey, maybe I have something here. My dogs have always let me bathe them, so maybe I have this, maybe I should monetize this,’ ” she explained.

“This is especially made for people who work long hours, who have dogs … that are aggressive and have bitten before, or who have to take all the animal’s documents with them wherever they go,” Piney said.

Piney said the service comes when hygiene is top of mind.

“It’s timely because everyone is pushing hygiene at home,” she said. “We have to take care of the cleanliness of the pets. If people take them to a groomer, they touch the animal and you have to leave it there. Here, you are the only one who touches your pet and you are the one who takes care of everything.”