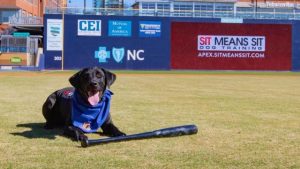 Then one day at a family gathering, their new puppy nipped their niece when she ran up behind him.

“Everybody said, ‘You’ve gotta get rid of him, you can’t have a dog who bites kids,’ and I thought that wasn’t fair to him,” said Michael.

When the couple found dog training at another Sit Means Sit location, Michael instantly became hooked. “I caught on really quickly, and I became good friends with the owner,” Michael said. “That turned into a passion — I have always loved dogs, and I have always been good with them. I thought, let’s do this full time.”

That was more than four years ago. Now, Sit Means Sit Apex has trained 1,500 dogs across the Triangle. They’ve won the WRAL Voters Choice Awards vote for best dog trainer for three years in a row, and their family dog, Ripken, is the “bat dog” for the Holly Springs Salamanders and the Durham Bulls.

He is also the official Sit Means Sit Apex mascot.

“Our two other dogs get to stay home, but he has to pay his rent,” Michael joked.

During COVID-19, when more humans are working from home and around their animals 24/7, Sit Means Sit has received more calls about separation anxiety than ever before. Michael said more people are also adopting dogs and puppies because they have more free time — and seeking out training as a result.

“People are home all the time, so they feel bad keeping their dogs in their kennels or teaching them to be alone,” Michael said.

His number one piece of advice for pet owners in the same situation? Keep your dog on a routine so they’ll learn it’s okay to be alone sometimes.

It’s also a great idea to get a crate and teach your dog to see it as their room — a safe, comfortable place they can escape to for alone time, Michael said.

“My daughter has her own room because sometimes she needs a break from us,” he compared. “She needs to learn that Mom and Dad are still here to protect her even though she can’t see us. It’s the same thing with dogs.”

Even if you’re working from home, crate your dog like you would if you were going to the office because “when you do go back to your normal life, your dog’s going to have to be okay with you leaving,” Michael said.

Since the most important part of dog training is teaching the owner how to work with their dog in their own home, social distancing is easy, Michael said. Keeping a safe distance from his clients or talking to them virtually has only helped his customers, because they’re forced to work with one-on-one with their dogs.

Sit Means Sit Apex is constantly adapting to better serve families. Every year Michael and his employees attend new training workshops, and the business is always seeking new ways to serve the community.

“I never want to get stagnant in what I do,” said Michael, who just became certified with two of his employees to train therapy dogs through K-9 Caring Angels.

So far, Sit Means Sit Apex has certified four dogs, and plans are in the works to take dogs to hospitals, nursing homes and fire stations.