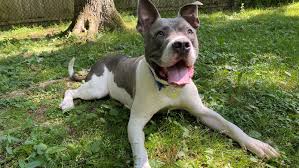 Hank has healed, is doing well in his training class and is ready for a home of his own.

Sometimes a dog like Hank is better suited as a pet than a working dog in the Animal Farm Foundation’s innovative service dog programs. It trains former shelter dogs as mobility, active task work, hearing alert, or psychiatric service dogs.

Hank, an 18-month-old mixed breed, came from a city rescue asking for help in training the big oaf who didn’t know his size or good manners.

“He was jumpy, mouthy and more pushy than they were able to handle,” said AFF Director of Training Bernice Clifford. “He is silly and will hold your hand or arm in his mouth as if to lead you where he wants to go. He is clumsy and has no idea he is so big.

“We were just going to train him and give him back to the rescue.”

Then Hank was diagnosed with a blown cruciate ligament, or CCL, in his knee because of a genetic bone defect. Surgery was needed, so AFF took possession of Hank.

After extensive surgery in February, Hank was on 10 weeks of crate rest, which was extended another month. Training had to be halted.

Hank has almost completely recovered and is doing well with his training.

“We’re working mostly on impulse control,” said Clifford, “instead of jumping up on people, to sit or lie down when he meets people. He’s very barky when he wants something, so we’re teaching him to sit, wait and be a little more patient. A lot of positive reinforcement. He has to sit or lie down, and then he gets a treat. It’s working.”

Hank had a home for about 48 hours, but his new owners preferred to reprimand him with a “No!” and he barked at them, and so he was returned to AFF.

Clifford seeks an experienced dog owner who will continue positive reinforcement with Hank.

“Someone with a sense of humor who is not going to get frustrated by him,” she said.

Hank loves other dogs and is enjoys playing and sleeping with the kitten in his foster home. He hasn’t been around kids.

“He loves to cuddle, enjoys a nice walk and likes romping with his dog friends. He thinks he is a tiny dog who can fit anywhere, but he cannot. He is very smart, playful and loves toys and any kind of smart game, like puzzle games with food inside them.

“He doesn’t fit into our other programs,” said Clifford, “he needs to fit on someone’s couch.”