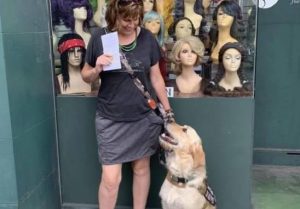 When the phrase service dogs comes to mind, many people immediately think of a dog that is serving someone with a visible disability. Most people think of military veterans, individuals who suffer mental disabilities, or individuals who have Post Traumatic Stress Disorder. The fact is, there are many people who have service dogs who do not have a “well known” disability or even a disability that is apparent to the public.

“I became interested in Service Dogs several years ago, when it became apparent that I would benefit from having one,” said Grotberg. “Service Dogs are expensive. It is common to pay twenty-thousand dollars and up for a fully trained Service Dog. This was not in my budget, so I looked at alternatives and became involved with an owner-train program. This is where a dog and handler go to classes once a week with a professional Service Dog Trainer. They learn new skills each week and practice daily homework. These classes can last one to two years as the training of a Service Dog is extensive and time consuming. This more economical approach was a good fit for me since I have a background in training dogs and was willing to put in the work.”

Grotberg’s journey has led her to interact with other people who own service dogs and gain extensive knowledge about the service dog world.

“I have had my current Service Dog for nearly a year. Bailey is a 1.5-year-old Labradoodle,” said Grotberg. “He is still in training. This stage is known as SDiT, Service Dog in Training. In NC, SDiT have the same public access rights as Service Dogs. Puppy training, Obedience Training, Public Access Training, how to behave anywhere and everywhere, from the mall to a restaurant, and Task Training, the actual work the dog will perform to mitigate the disability of handler, are all part of the dog becoming a service dog.”

For individuals interested in service dog training, or a service dog of their own, the process is extensive and requires an ample amount of time and training. There are several tests that are used for the Service Dog assessment. The CGC (Canine Good Citizen) and the PAT Test (Public Access Test) are two of the tests that the training dog must pass to become a certified service dog.

“Owning a Service Dog is a huge privilege, and I am so thankful for mine, because these highly trained dogs mitigate individual disabilities and can greatly improve quality of life. They are also a lot of work,” stated Grotberg. “A Service Dog must be clean and well groomed at all times, training must be ongoing to keep behavioral standards high, the dog must be given opportunities to relieve itself before and after each outing and often during as well. For example, when I go clothing shopping, I often leave the store for a potty break for my dog and then head back in again. I must consider the needs of my dog at all times and must train him to wear unusual equipment for a dog, such as protective boots to shield his feet from summer’s hot pavement. I do not believe that most people would keep a service dog long term unless the benefits outweigh the negatives for them. They are just too much work.”

One thing that should be known to the general public is that there are many different types of support animals. Emotional Support Animals, Therapy Animals, and Service Dogs are all different and they all play a different role with their owner. Emotional Support Animals require no special training, only have rights through HUD, and they have no special Public Access rights. Therapy Dogs have special training to visit places like hospitals, seniors homes and prisons. They typically must be tested and licensed for insurance purposes. Service Dogs perform specific task work to mitigate disability for one person. They are highly trained and have full public access rights. They are legally considered medical equipment.

“There is a great deal of public confusion regarding SD in the USA. Many people are confused between Emotional Support Animals, Therapy Dogs, and Service Dogs,” said Grotberg. “This confusion can cause a great deal of difficulty for service dog users because the public and businesses may not be aware of their legal access rights. I have experienced such issues. Generally, the only public places service dogs may not legally access are sterile environments, such as hospital operating rooms. Service Dogs are considered required medical equipment under the law. Basically, anywhere a disabled person would be allowed to bring or use their wheelchair, a service dog would also be allowed.”

“Businesses are, however, protected against abuse of their property by poorly behaving service dog teams. According to ADA regulations, they may ask a SD team to leave the premises if the dog is defecating on their property or if the dogs’ behavior is unsafe or disruptive (i.e. barking, lunging, jumping).”

Along with the public misunderstanding the different types of service animals, there is also a proper etiquette that is construed when the public sees a service dog. If a service dog appears without his or her owner, one should immediately follow the dog. The service dog has been trained to find the closest help possible if they are unable to perform the task needed. Do not try to corral the dog or catch the dog, simply follow them to the location of their owner.

“The Public Access issue is probably the biggest concern for the service dog community. We are often given a hard time or even denied access illegally, when our dogs are behaving exactly right because the public is unaware of ADA regulations,” stated Grotberg. “General public response is also very challenging at times. Proper etiquette for the public is; no talking, no touching, and no looking at Service Dogs. The dogs are working and need to concentrate. Interact with Service Dog users just as if their dog was not there. Do not ask why a person has a Service Dog. You are unintentionally asking them for their personal health information.”

“It is very common to have people want to talk to Service Dogs, bark at them, call to them, try to pat them, follow them around stores, and ask the handlers about their personal health information,” stated Grotberg. “I personally try to be patient, friendly and educational with people who are interested, but it is really difficult to be harassed by people following us and barking or grabbing at my dog as we walk by. My favorite responses are from the people who ignore us, address only me, or just smile. I really appreciate that.”