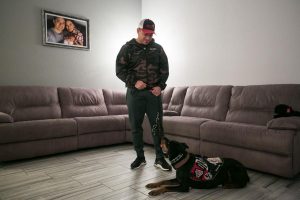 Yakima resident Albert Navarro served for four years in the U.S. Navy, was stationed in the Washington, D.C., area following Sept. 11, and completed two tours of the Persian Gulf before receiving an honorable discharge.

Despite the post-traumatic stress he picked up from his service, Navarro said he was able to get back to a type of civilian life he considered “normal.” He and his wife even had a child on the way.

But when the couple’s infant son died shortly after birth, Navarro and his wife struggled to cope with the loss. He suggested they try counseling, and so found himself in a VA Hospital waiting room, thumbing through a brochure left on a nearby table that he had no intention of actually reading.

The trick was to “look busy.” If he looked busy, then that would signal to other people to not engage, to not start a conversation, to leave him alone. Navarro used the trick frequently, in any waiting room, line or situation where he was around other people and otherwise unoccupied.

The comment from his social worker, at the end of his session, therefore caught him off guard. “Maybe a service dog would help.”

When he asked about the comment, the social worker pointed out he had been paging through the brochure on service dogs while waiting for the appointment. Navarro said he and his wife had talked about getting a dog during the pregnancy. He didn’t believe his random choice of reading material was a coincidence.

He went online and started learning more about Service Peace Warriors, a nonprofit organization based in Eltopia, a community about 15 miles north of Pasco, that connects honorably discharged military personnel coping with PTSD in Washington state with certified service dogs, free of charge.

Service Peace Warriors is how Ranger, a German shepherd/shar-pei mix, joined the Navarros’ lives. Navarro said there were days before Ranger when he didn’t want to get out of bed. Now, Navarro knows he has to get up, feed Ranger and take him for a walk. Ranger accompanies him “practically everywhere,” he said.

“The military teaches you how to be a service member, but they don’t teach you how to be a civilian again,” Navarro said. “(With Ranger) I’ve learned to get out a little bit more, to accept that he’ll tell me if we need to go. He’s not a pet. He’s a working dog, and he’s family.”

Service Peace Warriors has trained and connected about 50 dogs to veterans over the last seven years, including about 18 dogs this year. Three are with veterans living in Yakima.

“These veterans often have suffered beyond our understanding and are deserving of our support,” the Service Peace Warriors website notes. “These dogs open up a new world to them that they didn’t know they could have. With trauma issues, it is a gift to have the company of a dog who provides unconditional, loving companionship.”

Mattox was born in New Zealand and moved to the United States when she was 17 years old. She has complex PTSD. She experienced more than a decade of abuse, first at the hands of a violent and controlling mother, then while in various placements in the foster care system. For years, not knowing what post-traumatic stress disorder was, she struggled to understand her trauma. She found a sense of comfort working with sheep dogs, farm animals, and then the first service dog she trained for herself.

Mattox describes Cloud, the German shepherd who came into her life in 2013, as the first warrior dog who led the way for all the other dogs she has since trained. When Cloud was about 6 months old, Mattox suffered from a major attack of PTSD that temporarily left her both blind and deaf. Cloud helped guide Mattox to her husband, who rushed her to the emergency room. The doctors told her they were surprised her blood pressure levels hadn’t led to a stroke.

“He was a big gentleman, our Cloud,” she said, “and he opened the doors for all this to happen, because he saved my life.”

Mattox trains Service Peace Warrior dogs to perform specific tasks, such as waking up veterans in the midst of night terrors, getting help from bystanders in a store if a veteran starts to have an episode, or standing behind a veteran in line so that no one will come up and startle the person.

The dogs can be trained to remind veterans to eat or take medicines, and to climb into their laps if veterans are starting to get depressed or anxious. They also are good listeners for veterans who may not be able to otherwise share their troubles with family members or close friends, Mattox added.

“Dogs are the most loyal creatures on God’s Earth,” Mattox said. “They’ll comfort you when needed. They’ll give their lives for you if needed. They give you a sense of security.”

Any veteran matched with a Service Peace Warrior dog goes through a thorough process. To be eligible, veterans have to have been honorably discharged and have PTSD from their service. They also go through an interview process with Mattox and an initial meeting with several dogs to make sure both feel a connection.

“We are very strict about how we do things,” Mattox said. “When we give a dog to a veteran, he really needs to be in need. And I like to see some interaction, to make sure it’s a good match. If the dog picks you, you get a better bond.” While canine Cloud helped start Mattox on a path to healing herself and others, she’s had to continue the work without him. A driver who was texting and driving ran over Cloud in September 2019, a loss Mattox still feels deeply.

It’s now the organization, her service dogs and the veterans they help that help Mattox get out of bed in the mornings.

That same sense of purpose resonates with Navarro. On a chilly day in November, he demonstrated canine training he’s done with Ranger in a warm and well-lit room in his home in Yakima. His daily routines and connection with Ranger have helped reestablish a sense of normalcy in his life.

“I’m not saying you forget the things you’ve been through,” he said. “But they start to go to the back burner.”

Navarro absolutely recommends that dog-loving veterans struggling with PTSD reach out for a service dog.

“While faith is a very important part of my life, and family and friends are a big reason that I am still here, Ranger has helped me a lot,” he said. “A dog won’t judge you. That’s the simplest way I can explain it.”

Mattox encouraged veterans struggling with PTSD and in need of a trained canine companion to start the process — to pick up the phone and call for more information or jump on the website and learn more. Staff is willing to help make the application process as simple as possible, she added.

“If you think they’re too far gone …” She paused. “We’ve had numerous ones that have walked right off suicide watch, who made it six months or a year without even receiving the dog because they knew they had something to look forward to. They are never too far gone.”