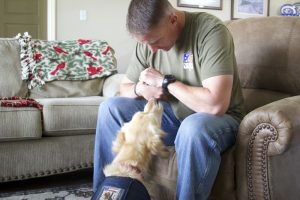 People across the country are turning to dogs for solace from the isolation and anxiety of the coronavirus crisis. Since the pandemic hit the U.S. just a few months ago, animal shelters have reported a whopping 70 percent increase in fostering and adoptions.

With nearly 20 percent of post-9/11 veterans suffering from PTSD and 20 veterans committing suicide every day, this delay is cruel. Fortunately, Congress is considering legislation that would force the VA’s slow hand.

The PAWS for Veterans Therapy Act would create a five-year pilot program requiring the VA to fund service dogs for veterans with PTSD and other mental health conditions. The House passed the PAWS Act with flying colors in February. The Senate should quickly follow suit so that this urgently needed program can be signed into law.

Without VA support, many veterans with PTSD can’t access a service dog. Service dogs cost around $20,000, and nonprofits that train and place service dogs with veterans for free have lengthy wait times.

Moreover, a regular dog isn’t a viable substitute. Service dogs are specially trained to perform vital tasks. They know when a veteran is having a retraumatizing nightmare and wake them up by licking their face. They provide veterans with a sense of safety by watching their backs, which helps veterans go out to work, see friends, and live a full life. Importantly, only service dogs can accompany veterans everywhere they go.

Despite these benefits, the VA has long refused to provide service dogs to veterans with mental health conditions. Only veterans with a visual, hearing, or mobility impairment can access a service dog through the VA.

Why is the VA so scared of giving service dogs to veterans with PTSD?

According to the VA, it isn’t getting hung up on cost or discriminating against veterans with invisible disabilities. Rather, the problem is there isn’t enough research to support the use of service dogs for PTSD.

The VA also claims service dogs are not an effective replacement for traditional PTSD treatments, such as exposure therapy and medications. This is a straw man. As prescribed in the PAWS Act, service dogs are a supplement to standard treatments. The bill requires veterans to be under the care of a VA mental health clinician in order to receive a service dog.

Finally, the VA raises the specter of unintended consequences. Even if service dogs have benefits, there might be countervailing negative side effects. This fear is baseless. The VA points to no study finding negative side effects when dogs are properly trained and carefully matched with veterans. Indeed, the only “evidence” the VA points to is its own botched and discontinued study, where the VA failed to vet the service dogs, and several dogs fell ill and two children were bitten.

In any event, the traditional treatments the VA touts aren’t risk-free. Psychiatric medications, for instance, come with a laundry list of serious potential side effects, including insomnia, anxiety, and sexual dysfunction. Service dogs, in contrast, are low-risk, high-reward. At worst, they’re clinically ineffective for some veterans. At best, they can save lives and the VA’s  money as veterans’ symptoms and prescription cocktails subside.

Let’s take stock of the intimate comfort and crucial mental health support dogs have given us as we have sheltered-in-place, disconnected from loved ones and surrounded by widespread loss of life. And let’s make sure veterans with PTSD have access to the dogs they need, too.

The past decade has made clear that the VA can’t be trusted to do this on its own. Yet the time for action is now. The risk of veteran suicide is only predicted to grow as the pandemic winds down, and unemployment and financial stresses mount. It’s time for Congress to step in by passing the PAWS Act.