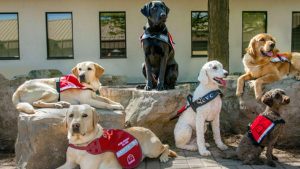 The pandemic has interrupted training for dogs for people who have visual or hearing impairments, disabilities, epilepsy, autism, or diabetes. Here’s what that means for the dogs — and for the people who rely on them.

When the Lions Foundation of Canada Dog Guides team called Andréa McLean in mid-March to ask her whether she’d take Gisele the poodle back from guide-dog training, McLean didn’t hesitate to say yes. “When they called us and told us, could she come home? I think my response was, ‘Why are you asking? Of course the answer’s yes,” McLean says. “I think most fosters, given the chance to have their foster puppy back from school, for any length of time — all of us, the answer would be yes.”

McLean had previously fostered Gisele for about a year, but the onset of the COVID-19 pandemic put her scheduled six months of training on hold. Within two weeks, Dog Guides was able to send the 150 dogs in training back to fosters or to dog sitters.

While Gisele’s unexpected return has brought joy to the McLean family, a pause on dog training is a big problem for the foundation and for the close to 60 people across Canada waiting for dogs to help them in their daily lives.

Dog Guides Canada trains dogs for people who have visual or hearing impairments, disabilities, epilepsy, autism, or diabetes. For some people, waiting for a dog guide means waiting to receive vital support. Dog guides can help their partners move from place to place, provide comfort and companionship, and perform alerts based on conditions in the environment or the health of their partner.

The Oakville-based charity typically matches 150 teams across Canada annually, but this year, it says, that probably won’t happen. Spring and summer classes have been cancelled, and fall and winter classes likely will be, too. Training teams requires in-person guidance, and, since many applicants have compromised immune systems, Dog Guides doesn’t want them to risk travelling to Oakville during the pandemic. “It’s all very unsettling, I think, is probably the kindest word,” director of program development Ian Ashworth says. Eventually, the charity plans to bring its 150 guides-in-training back to class, but, for now, training has moved online. Dog Guides is also working to remotely support the 1,100 dog teams already active in Canada, following up to ensure that the dogs are meeting recipients’ needs.

Basic online training does not replace the classroom training dog guides receive from professionals, nor does it negate the need for applicants and dogs to train together. “We have to teach our recipients to become dog trainers, basically, because a dog’s training can change,” Ashworth says. “It can deteriorate over time. It can change in different environments, sometimes [with] different people. So we need to teach our recipients those skills that enable them to continue that training once they return home.” Dogs and humans must also learn to work together. “Our recipients have, obviously, a whole range of challenges that they face. And so, on top of [those], we’re trying to teach them how to handle this highly trained dog.”

The McLean family, which lives in Burlington, cares for Beechy, a five-year-old poodle who breeds for Dog Guides. Gisele is her daughter, as is Karma, a puppy the family is also fostering. Both were born in McLean’s dining room. She says it’s not unusual for there to be so many dogs in the house. Her daughters help take care of them, recording basic training exercises with Gisele and sending videos to Dog Guides coaches to monitor her progress. Gisele seems happy and is doing well with her exercises, McLean says, but notes, “What we don’t know is how it’ll be for her to transition back to school. I do know she loves her trainers, which helps a lot.”

Ashworth says the delay in training means that dogs will need to be reassessed to ensure they can still perform guide duties. If the disruption in training means a dog no longer can, it will undergo a “career change” and be offered up for adoption as a pet.

One major concern for the dogs now is socialization, Ashworth says. Dog guides need to go wherever people do, but, right now, most don’t venture far. Gisele is well-socialized already, McLean says, but Karma was only nine weeks old when the pandemic was declared. “We’d take her a few places the first two weeks that she was a foster, and then COVID hit. She basically hasn’t been anywhere since.” Normally, McLean takes dogs she fosters to work, stores, and her kids’ swimming practices, getting them used to all sorts of sights, sounds, and smells. As more of the province reopens, Dog Guides says foster families can take dogs out, but it is asking them to limit that to essential trips only.

The training delay, which will increase if some dogs change careers, means it will take longer for everyone waiting to be paired with a dog. “Normally, we’d have Karma for a year to a year and a half. We will potentially have Karma longer,” McLean says. “Training has stopped, graduations have stopped, and the classrooms aren’t full yet. It’s going to take a while for everything to be moved through the system.”

Braydon Drexler, 13, is waiting on a new dog. He lives in Winnipeg and has worked with a dog guide named Keats since he was in kindergarten. Braydon has autism, and Keats helps him relax in otherwise stressful situations, such as school or going to the hospital, which he had to do recently after breaking his arm. Keats is due to retire and will go to live with Braydon’s grandmother, but, for now, his retirement has been postponed. Braydon’s mom, Tracey, says Keats doesn’t seem to mind. “Every time someone goes near the door, he’s waiting for his vest to be put on. He’s missing school.”

Tracey says that when they got Keats, Braydon didn’t speak and was dealing with sensory issues and other challenges: “Kind of as a last resort, being aged out of therapies and stuff, we decided to try a dog guide, and, boy, am I glad we did, because it’s made a world of difference.” She says she was hoping Braydon could take the coming school year to get used to living with a new support dog before he finishes Grade 8 and moves on to high school. She worries that transitioning to a new dog and a new school at the same time might be hard on him. Braydon says he’s “just a little bit” excited about getting a new dog when that does happen.