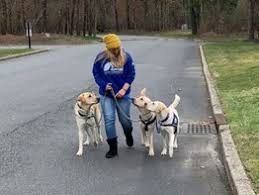 Eric Caron, a retired guidance counselor who has been blind since birth, recently moved to a new home. He noticed his guide dog, a yellow Labrador retriever named Ryan, had trouble leading him across a busy intersection he must cross regularly. Caron knew what that meant: It was time to retire Ryan, a near-senior citizen at 9 years old, to pet status and get a new guide dog.

But as the novel coronavirus spread, Caron’s “dog day” appointment on April 2, at the New York-based Guiding Eyes for the Blind, was postponed indefinitely.

“I had packed my bags a good month before the class date, including some special toys for the new dog,” said Caron, of Brattleboro, Vt. “I had a new pair of shoes for walking and a special shirt for graduation. I was ready. And now, you just have to take that bag and roll it in the closet.”

Like many people with disabilities, Caron relies on a service dog to help him navigate not just the world, but also his home and property. The dogs are trained to do specific tasks such as guiding people in public, opening doors and interrupting anxiety attacks. That training can last up to two years, and it is now on hold nationwide as the coronavirus crisis continues.

The handoff of already-trained service dogs to people like Caron also is paused, because it has to be done in person and with instructors and clients standing close together. That means people whose dogs are ready to retire, as well as people who have been on waiting lists a year or longer to get their first service dogs, remain in limbo.

“We’re under orders, depending on what state you live in, not to do activities that are not deemed as essential. Because this is considered education, it’s not deemed essential,” said Ben Cawley, director of training at Guiding Eyes for the Blind. “A guide dog-user would argue that it is essential, but we can’t be putting our staff or volunteers or applicants in an irresponsible situation.”

When New York ordered a statewide shutdown, Guiding Eyes for the Blind had 178 dogs in its Yorktown kennels as well as puppies in a second facility. Those dogs went home with staff and volunteers who are keeping them happy but who can’t train them during the pandemic to walk in grocery stores or down crowded sidewalks.

Canine Companions for Independence, based in Santa Rosa, Calif., faced a similar situation. Its six nationwide campuses are now closed, some 420 of its dogs in training are living with staff and volunteers, and the 400 people with physical and hearing disabilities on its waiting list are going to have to wait for the program to resume.

“We would love to be able, during this time, to continue to train the dogs at home and then perhaps look at doing some virtual training,” said Jeanine Konopelski, national director of marketing at Canine Companions, “but still, that in-person connection, the person meeting the dog, that still has to happen, and we can’t do that right now.”

Michelle Barlak, a spokeswoman for The Seeing Eye in Morristown, N.J., said a class to pair dogs and clients was in progress when the state shut down most businesses. The organization accelerated the training, got the dogs into homes with clients and has been following up by phone, Skype and email, she said.

An immediate challenge, Barlak said, is that the organization’s in-house veterinary clinic also was forced to close. That means local veterinarians end up handling problems, a more costly option eating into existing funding.

Another concern is making sure essential workers who rely on guide dogs can keep doing their jobs, said Thomas Panek, chief executive of Guiding Eyes for the Blind. If for some reason such a worker needed a replacement dog, he said, handoff could be tricky — and their critical work put in jeopardy.

“Right now, there are people who are blind and on the front lines in this crisis,” he said. “I know four people who work in the federal government. They have to go into places like the emergency response centers. They’re using their service dogs to get to work. They’re part of the crisis response team; they just happen to be blind.” How quickly future cohorts of service dogs can be ready remains an open question. Training programs are run on schedules, and those schedules are set back every day the pandemic goes on. Dogs living in foster homes may be safe and content, but some are losing skills.

“Many of our dogs need to learn how to work around adaptive equipment like wheelchairs,” said Sarah Birman, national director of training and client services at Canine Companions. “I don’t have a wheelchair in my house to practice with. I don’t have the special light switch to practice with, like the one that’s specially constructed at our center.”

The longer the crisis persists, Barlak said, the harder it will be for the dogs to get back on track. For now, she said, “I think our dogs are going to be able to catch up quite easily. If we’re all still sitting here a year from now? Then, I would be concerned.”

Teal Morris, a family caseworker for the Indiana Department of Child Services, is waiting out the worry with her golden retriever-Lab mix, Phil. She got him through Canine Companions in 2011 to help with her lifelong spina bifida. Phil picks up things she drops, and she uses his leash to maintain balance if she stumbles or trips.

But Phil is 11 and due to retire. Morris was supposed to meet his replacement in May. Now, the earliest possibility is August.

“There’s just so many unknown factors,” Morris says. “I’m trying to take it one day at a time. I have a little girl who is 2½, and with her, things are changing every day about regulations and schools being opened and closed.”

Caron, in Vermont with his guide dog Ryan, also is waiting out the crisis as his wife picks up extra 12-hour shifts. She’s an emergency-room nurse treating coronavirus patients.

“I know that Guiding Eyes is trying really hard to keep everything flowing. When they know what the virus is going to let us do, they’ll get back to me,” Caron added. “I don’t even know which dog would have been mine, but in my heart, I’m picturing this dog just waiting.”

For now, he’s focusing on Ryan.

“I still have to go to Tractor Supply to get dog food. I still have to do things,” Caron said. “Right now, I need him to stay healthy so we can go for walks and stay connected to the world.”