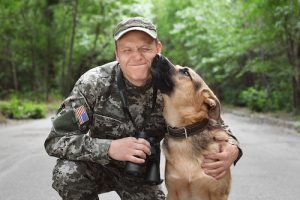 The most important task for service dogs of veterans with PTSD is interrupting episodes of anxiety.

A study by researchers at Purdue University found that of all the tasks service dogs perform for their veteran owners with PTSD, disrupting anxiety was the most helpful.

“We found that veterans with PTSD service dogs rated all of their dog’s trained behaviors as important for their PTSD, but the most important task that was used most frequently was the dog’s ability to respond to the veteran’s anxiety. Veterans also rated untrained behaviors, or things that any dog might be able to provide like a source of love, companionship, and routine, as equally important for their PTSD symptoms,” Kerri Rodriguez, Ph.D, author of the study and a researcher at the Center for the Human-Animal Bond at Purdue University told Theravive.

Research has proven that service dogs can benefit veterans who experience PTSD and there has been debate surrounding what sort of training PTSD service dogs need to be the most effective for their owners.

Rodriguez says the research suggests veterans use and benefit from specific tasks PTSD service dogs are trained, which set them apart from emotional support animals or regular pet dogs.

“PTSD service dogs are trained for a variety of behaviors aimed to help a veteran’s PTSD symptoms such as alerting to anxiety, waking from nightmares, and assisting the veteran in public and crowds. Our research suggests that all of these trained behaviors are important for different aspects of a veteran’s PTSD and mental health and most were used on a daily basis,” Rodriquez said.

“Veterans also perceived the dog’s untrained ability to provide a source of love, companionship, routine, and comfort as very important for their PTSD symptoms. Veterans with a stronger bond to their dogs also perceived their dogs as more important for their symptoms. This bond with a dog can be therapeutic in itself, which allows the veteran to form an emotional attachment. So, the service dog is likely benefiting the veteran in many different ways,” she said.

As part of the research, veterans were asked to rate tasks of trained service dogs. Some tasks the dogs are trained in include noticing cues displayed by veterans when they are distressed or anxious, and then pawing, licking, or nudging the veteran to encourage them to focus on the dog. Other trained tasks include noticing if veterans are having nightmares during the night and waking them up.

In public, the dogs are trained to perform tasks like looking in the opposite direction in a crowded room to provide a sense of safety and security for the veteran.

Veterans rated all of the dogs’ trained tasks as “moderately” to “quite a bit” important for PTSD. The researchers found that trained tasks were used on average 3.16 times every day.

Rodriguez says that though service dogs are not a cure for PTSD, they can make a significant difference for veterans with the condition.

“It is important to note that both our research as well as studies from other research groups have found that service dogs are not a cure for PTSD, but may help symptoms. Specifically, veterans with PTSD service dogs do report lower PTSD symptom severity than veterans on the waitlist to receive a service dog, but not below the diagnostic cutoff for a PTSD diagnosis. Secondly, PTSD service dogs should not replace or eliminate other treatments that a veteran is receiving, such as psychotherapy or medication. Rather, service dogs may be an effective integrative or complementary intervention that can benefit veterans in addition to their evidence-based treatments,” she told Theravive.

“It’s not uncommon to hear veterans talk about how they wouldn’t be alive if it wasn’t for their service dog, or how their service dog has allowed them to become a husband and father again. For years we have heard stories such as these, but now there is finally emerging scientific data to show that those changes are real. We hope our research can continue to provide the PTSD community, mental health professionals, and veterans and their families with more information about the specific potential benefits these service dogs can provide.”