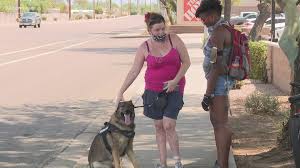 A disabled Mesa resident says she is in a fight to ride the bus. She relies on the bus to get around but claims a Valley Metro bus driver refuses to stop specifically for her.

Kelley McHood has had to overcome physical challenges for decades.

“Over 65% of my body has third- and fourth-degree burns from the waist down,” says McHood.

The burns on her feet are so severe, she’s missing some toes. It’s been difficult, but she has her service dog Scooby to help her.

“He helps me get upstairs, get around, so when I need to get out I can get out.”

She doesn’t have a car, so she uses the Valley Metro bus on Val Vista and Broadway in Mesa to get home.

“My life kinda depends on the buses, because I don’t have sweat glands where I was burnt so I overheat quickly.”

It wasn’t a problem, until last week when a driver had an issue with her clearly marked service dog.

“He asked if it was a service dog, I said yes. And he said what does he do for you?”

The American Disabilities Act says when it’s not obvious what service an animal provides, those questions are allowed. But Kelley says this driver took it too far.

“He then humiliated me, pointing at the rearview mirror, yelling, ‘your dog better not bite anyone,'” she claimed. “But he was just sitting like he is now.”

Kelley hoped to put that experience behind her, but she says that the same bus driver now refuses to stop for her.

“We were sitting in the bus stop waiting, he started to come out of the cutout, he looked right at me, then went back into the lain to go straight.”

Both times that happened she had no choice but to walk home.

“With my injuries, every step is like a thousand for me. So now I have open sores on my feet, I have to go to the wound care at the burn clinic now, it takes forever for things to heal, and all of it could’ve been avoided,” says McHood.

She has filed complaints with Valley Metro and the Department of Justice because, under federal law, all service animals must be allowed to accompany people with disabilities in any place where the public is allowed.