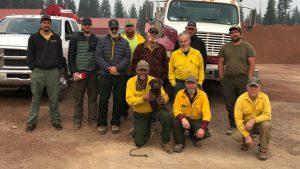 Firefighters battling the Archie Creek and Thielsen fires have had some long, exhausting days.

But for some, their troubles seemed to melt away once they got back to camp.

And joining Ralph is his service dog, Cowboy – the morale boosting, firefighting puppy.

“He just keeps my life together, helps keep it together, and why not share? And the firefighters, you should see the smiles,” says Colombo.

Cowboy is a three and a half month old Labrador retriever.

As Colombo’s service dog, they go everywhere together.

So when Colombo started working on the fires in Douglas County, naturally Cowboy came with him.

And the firefighters are happier for it.

“One of the leaders says he hasn’t seen this high of morale on any fire, and he’s been doing it 40 years,” Colombo says.

Besides the cuteness, one thing you’ll notice about Cowboy is his bandanna made of Nomex.

“[I] made him a bandanna so that he can wear his Nomex up on the fire line,” Colombo explains, “because everyone’s got to wear Nomex. And a fella from South Carolina, he said you ought to have everyone put their state initials on there. So we’re up to about 16 in three days.”

He has signatures from Alaska to Kentucky, Florida and beyond.

Cowboy has become a bit of an internet sensation.

And sometimes his fame precedes him.

“All the firefighters know Cowboy,” says Colombo. “They have no idea what my name is. I’m the guy with Cowboy; that’s all there is to it.

Unfortunately, Cowboy and Colombo are heading back home soon, so the firefighters are sad to see them go.

But they’ll never forget the puppy who kept their spirits high when times were tough.