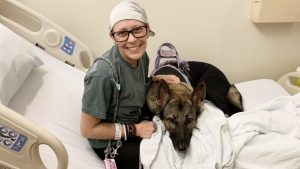 When the coronavirus pandemic took hold in the U.S. earlier this year, Sydnee Geril stopped bringing her service dog, Tulsa, to her chemotherapy treatments. The 25-year-old made the decision out of an abundance of caution; while the chance of spreading COVID-19, the disease caused by the new coronavirus, through pet fur is unlikely, the American Veterinary Medical Association still recommends taking precautions.

But in late May, Geril discovered a onesie for dogs called the Shed Defender — which helps control shedding — and her German shepherd has been able to stay clean and get back to work by her side.

“I’m so happy to have her back,” Geril told TODAY. “I honestly did not realize how big of an impact she had until I didn’t have her.”

The Shed Defender, or the “super suit,” as Geril calls it, has been on the market for nearly four years — so it wasn’t designed to deal with the coronavirus pandemic. But Tulsa wears it with a set of booties to cover most of her fur. Now, instead of needing a full bath after every hospital visit, all Geril has to do is wipe down Tulsa’s face and wash her suit. (The Centers for Disease Control and Prevention recommends laundering clothes worn by an ill person on the “warmest appropriate water setting for the items.”)

Geril lives in Ocala, Florida, and was diagnosed with Ewing’s sarcoma, a rare bone cancer that typically affects children and young adults, in October 2017. After nine months of treatment, she went into remission and decided to adopt Tulsa and train her to become a therapy dog. Therapy Dogs visit hospitals, nursing homes, schools and other health care centers to cheer people up, and Geril said these visits were one of the only things that made her feel better during her hospital stays — and something that inspired her to get Tulsa.

Unfortunately, after eight months of remission, Geril’s cancer returned, so the 2-year-old pup is now training to be her personal service dog, which requires a greater time commitment than what is needed for therapy dogs. Service dog training typically takes around two years to complete, and the dogs learn to cater to the personal needs of their owners.

Geril gets treated at the Moffitt Cancer Center in Tampa, Florida. According to the center’s website, service dogs, guide dogs and therapy dogs are welcome in the building’s public spaces as long as they are well-behaved and remain under the control of their handlers.

Geril decided to start documenting her journey with Tulsa on Instagram after she discovered the service dog community on the platform. She said a lot of misinformation and misconceptions exist about service dogs, so she wanted to do her part to help educate others.

“There’s no handbook on service dogs; there is no right or wrong,” she said. “I just really wanted to share, educate, get (the) word out, because I didn’t know anything about it before I started with this.”

Geril’s chemotherapy treatments and her fear of needles cause her to pass out frequently, so one of Tulsa’s main jobs is to alert her before that happens. Geril said the human body undergoes a chemical change before a fainting episode, and dogs can recognize that change through smell. If Tulsa detects this scent, she puts a paw on Geril’s leg to let her know that she has between 10 to 30 minutes before she will start to feel dizzy.

“It’s huge; it’s given me my freedom back greatly,” she said. “I can go out by myself now.”

Geril said she didn’t truly understand how much Tulsa helped until she had to pull her from work during the pandemic, as she noticed her health and quality of life declined drastically.

“I went into a wheelchair full time because I was afraid to be up and walking around because the hospital’s rules are you can’t have any visitors,” Geril said. “I didn’t want to risk passing out with nobody around.”

However, since Tulsa has started using the Shed Defender and returned to work, she said she feels more confident and can worry less.

Geril said that although Tulsa was initially a little unsure about her new attire, after a lot of playing and positive reinforcement training, she has adjusted very well.

“It’s a new world now and we’re finding new ways to cope with it, and I’m just so happy that we can find new uses for products like that,” she said.