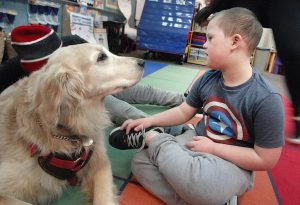 When it came time for 8-year-old golden retriever Zephyr to retire, he didn’t know what to do.

A service dog of seven years, the usually calm and relaxed dog began showing signs of separation anxiety. “Zephyr is a working dog, that is all he knows,” said Dawn Auten of Normal, Zephyr’s owner and mother of Tyler Auten, for whom Zephyr provides companionship and service. “He’s slowing down, my son is speeding up. I said, ‘What are we going to do with Zephyr?’ He’s going to retire, he’s not ready to retire, (and) the anxiety is heightened when we tried to leave him home without taking him with Tyler.”

Tyler, 13, has autism and requires significant help and support from his service animal. As Auten grew older, his mother noticed Zephyr was unable to keep up with her son. When it was time, Zephyr retired from his post and the family brought a new service dog, Disney, home on Dec. 24.

But Zephyr couldn’t understand this new arrangement. For seven years, he left the house and went everywhere with Auten. The dog began ripping out his fur and experiencing other symptoms of separation anxiety, prompting the family to discuss finding a new outlet for Zephyr.

Dawn Auten collaborated with kindergarten teacher Audrey Hensley and, after numerous talks with the principal and teachers at Colene Hoose Elementary, Zephyr started his new position on Jan. 22 as a therapy dog for students.

He loves every second of it.

“That dog has done amazing things for my son,” said Dawn Auten. “He went from not being able to transition out of a classroom to being able to roam the halls of a junior high with a TA.

“My hope is that he benefits these students in this school like he’s benefited my child.”

Service animals are trained to help people with disabilities, such as sight impairment, seizure detection and even providing comfort to their owner. They are also protected under the Americans with Disabilities Act and are permitted in public spaces such as restaurants and other businesses.

“When we first started looking at a service dog, our son was a huge runner and he gravitated towards water. It was a huge concern,” Auten explained. “He would get out of our house, sometimes during the day, sometimes at night, and we wouldn’t know where he went to. He has gotten out of our house, and Zephyr has had to track him and found him.”

Therapy animals provide comfort and emotional support to people, but they are not permitted to enter public establishments.

One of the biggest differences between therapy animals and service animals is that people other than the owner are not permitted to pet the animal, Auten said. People are encouraged to refrain from petting the dogs and engaging with them, which could distract the animal from performing its job.

Transitioning from working as a service dog to a therapy dog was difficult for Zephyr at first. He was not used to receiving attention and affection from people other than Tyler.

“That’s really what he needs, is to be loved,” said Auten. “So now, he gets to have that attention that he has worked towards.”

Zephyr’s new job begins promptly at 7:20 a.m. when Hillary Tanner, a social worker at the elementary school, picks him up. From there, Zephyr usually starts his day lounging in one of his corners in a classroom, providing comfort as needed to the students. Tanner said many of the students are already responding positively to Zephyr’s presence.

“Every classroom has seen different changes,” she said. “It’s definitely improved the level of happiness. He goes into the library with one classroom, and some kids who have never picked up a book because of some behavioral concerns are now picking up books and reading to him.”

While students are reading, Zephyr may wander the room, checking in on each child until he finds who needs him the most, said Tanner. Then he will sit down and let the student pet him or read to him. Some students with high anxiety are allowed special time with him, or students may earn time to visit Zephyr to reinforce positive behavior.

“I had a little girl who was crying really hard and he got up from where he was and went to her and put his chin onto her to calm her,” said Hensley, a kindergarten teacher at the elementary school who is friends with Auten and her family. Hensley, whose son also has autism, had first-hand experience with Zephyr prior to bringing him to the school. Auten and Hensely worked closely together to bring Zephyr to the school as a therapy dog. Though it was a tough transition at first, Zephyr is taking to his new role providing comfort and a sense of calmness to many children with behavioral and cognitive disabilities.

“I think what’s so cool about him is that he adapts to the role of the room,” Hensley said. “He kind of learned that first week what the expectations were, but he’s just amazing like that.