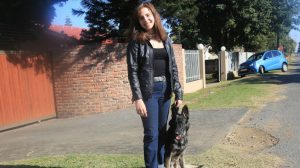 An East London woman says she was refused entry to the OK MiniMark in Meisies Halt near Gonubie on Saturday because her service dog was not allowed on the premises.

Kayleen Dreyer’s service dog Harley is trained to help her with non-epileptic seizures. The animal is required to be by her side at all times.

Non-epileptic seizure (NES) is most often caused by mental stress or a physical condition.

Dreyer, 19, said it was not the first time she had been turned away from enclosed shopping malls because of her dog, and she was growing tired of it.

She went to the store on Saturday to do some shopping for her business when the security guard at the store told her dogs were not allowed as it was store policy.

She explained to the guard why she needed the dog, but she was still not permitted to enter.

Because she was refusing to leave, the security guard called a manager who, according to Dreyer, also did not allow her in.

“It’s illegal to refuse us entry. Everyone was looking at us. It is frustrating,” she said.

“This problem of stores not having information about the conditions of their customers and not training their staff on what to expect is a big challenge. At least when I explain they should understand because the dog has a collar with all the information and I have documentation to prove it,” she said.

“I am very upset because I have all the documentation. It is as if I don’t live a normal life,” she said.

Dreyer’s mother Bernice told DispatchLIVE her daughter had been diagnosed with her disorder almost a decade ago. Seeing her suffer in stores with little or no information about her condition was stressful.

“Discrimination against my child is unfair. I was not there to help her because her dog was there. People out there are not aware and they don’t want to know. They don’t care,” she said.

A manager at the store, Akhona Adams, said he was not present at the time of the incident but had heard about it.

“We don’t chase customers away. This was reported to our head office. She was offered help but she refused. I don’t really know what happened,” said Adams.

He referred questions to the store’s head office. A person named Tony at head office asked that an e-mail be sent and said he would reply. He had not done so by print deadline on Monday.