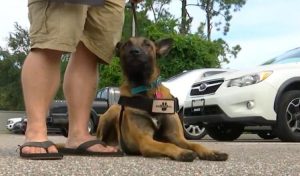 Three disabled veterans with ADA trained service dogs say they were kicked out of the same bar and restaurant in Port Orange twice.

The owner has since apologized but as WESH 2’s Claire Metz reports, the veterans are angry and more than disappointed.

“I tried to show them his certificate– that he was actually a service dog not just a pet,” Stephen Harmon said.

Stephen Harmon is a disabled veteran with PTSD and other health issues and his service dog Major has been a lifesaver.

Harmon said he was stunned Friday when an employee at the Port Hole told him there were no dogs allowed.

“I was crying because I was just so hurt that someone would actually do this to a veteran,” Harmon said.

Clark is also disabled and has a service dog so she and her fellow veteran Shawn Salvi decided to try Port Hole again, thinking what happened to Harmon was a fluke. A friend was recording cellphone video when a reluctant server said they had to leave.

Port Hole General Manager Mike Knight says the business has had a no dog policy but admits staff is not educated enough about service animals.

“We plan to change the environment of the restaurant to where we will accommodate service animals,” Knight said.

Knight says he comes from a family of veterans and that the business would never deliberately disrespect them. He says he welcomes them.

“I can’t apologize more than I am today,” Knight said. “We offered to do some fundraisers and be educated by their organization.”

The veterans said though they appreciate Port Hole will welcome service dogs going forward and that the bar-restaurant regrets the incident.

However, they say it doesn’t change how they felt when it happened to them.