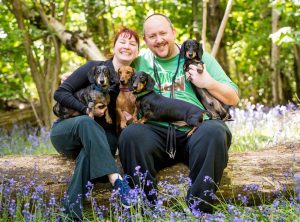 Sausage Dog Hotel in Berkshire has seen help from clients and followers from “all over the world” after setting up the GoFundMe page.

The service provides long and short-term care, a day-care, and walking, all specialised to sausage dogs.

“Covid-19 has had a devastating effect on our business,” owner Phil Curtis told the PA news agency.

“Almost all of our clients have regretfully been forced to cancel or postpone their bookings for the past several months, and into the foreseeable future.” Mr Curtis started the sausage dog boarding service in 2012 with his wife Lia.

“We have two sausages of our own, Stanley and Ollie, who are now 10 years old,” he told PA.

“After becoming friends with many others and being part of meet up groups in the dachshund community, it became clear that with their unique shape and nature, dachshunds would really benefit from a breed-specific holiday home-from-home.”

Mr Curtis said that the hotel’s recovery is dependent on the Government relaxing overseas travel restrictions, as much of their business comes from looking after dogs while their owners are on holiday.

He told PA: “We never had to officially close, since we are totally isolated and are able to facilitate drop-offs and pick ups without any need for human interaction, but there just hasn’t been any business due to the travel restrictions and uncertainty.

“There have been signs in the past few weeks that some holiday travel may be possible from next month… but there is just no way to know for sure, so we are living with constant uncertainty.

“Sadly none of the Government schemes were able to help us since we fall into the category for which there is no help available.”

The hotel has now raised over £1,400 for its business, and hopes to be running fully again by the end of the summer.

“So many of our clients, fans, friends and followers from all over the world were contacting us, asking for ways they could help, so we put this fundraiser together and the response has been overwhelming,” Mr Curtis told PA.

“We are just hoping to cover part of (our) expenses for the next couple of months, so we can come out in one piece on the other side of this.

“Fingers crossed, we’ll be back in action properly by the end of the summer.”